Just posting an update on the insectivorous bog I constructed last August.  I am pleased to say that it weathered the winter better than I expected!  Thanks to the close proximity of large maple trees, I mulched the bog under about 12" of fallen leaves and waited....  By early May the weather was such I had to start removing the mulch and to my surprise no deaths or rot.  What was the problem though was the maple keys in the mix, along with flung seeds from picky birds at the adjacent feeder which germinated and had to be removed.  But the bog now thrives: 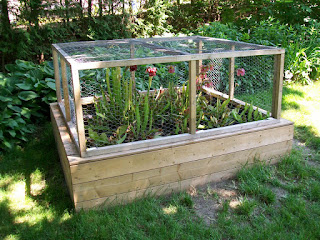 As you can see, the "cage" used to contain the leaves and protect it from digging squirrels remains.  Unfortunately squirrels and chipmunks like to dig in the bog (although they don't directily damage or eat the plants), I still need to leave the cage on the frame, since the resident "scare-gnome" doesn't deter them either.  At least the "plant food" can get through the mesh! 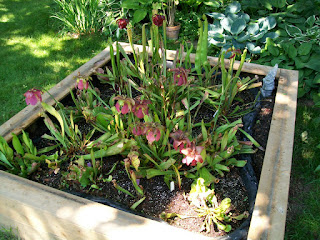 So not only are the plants thriving and producing new growth, I was fortunate to get over a dozen flowers.  And they are still coming.  So based on the success of this bog, I have decided to build another one elsewhere in the garden this summer.  That is between model building of course!  Until the next post, enjoy the flowers! 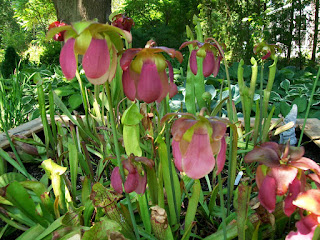