Today I would like to tell the tale of another "boat"; the Jean was not first.  For this we will go back almost two years, when it all began.  So have a cup of tea, get comfortable, and read on.

Approximately two years ago, I was just finishing up some other model (this is for a later post) and was looking for something different.  I had been in a sort of Gundam phase so it was time for a change.  While surfing the internet, I came across some new artist whose work I hadn't seen before, but took to it very quickly just the same.  His name was Ian McQue, and his depictions of flying boats cobbled together out of spare parts and junk was just the thing.  He was not afraid of colour and there was great composition and perspective not just in his paintings, but also in the many line sketches.  (His work also reminded me of another artist, Chris Foss, whose use of colour and fantastic images I discovered way back in the 1970's during the first Alien film).  The painting which inspired me the most, "Arrival at Sky Harbour", is pictured below... 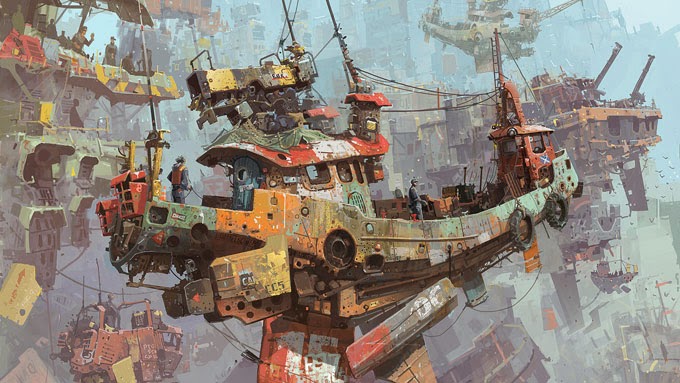 At this point I began to plan a model (all in my head; I am actually a trained illustrator (before computers),  but have since let my skills lapse in favour of modeling...) and started compiling parts from as many sources as possible.  Plastic shapes, parts from old models and toys, and basically anything which looked appropriate (when painted and weathered of course!).  I had some old vacuum formed shapes which I used for the hull, and then just began layering and building.  Sometimes it would work, other times it was unsuccessful and would have to be removed.  As I mentioned in a previous post, 2D to 3D is not always that easy. Progress was irregular as you can't work on a model all the time.  After several weeks, the result.... 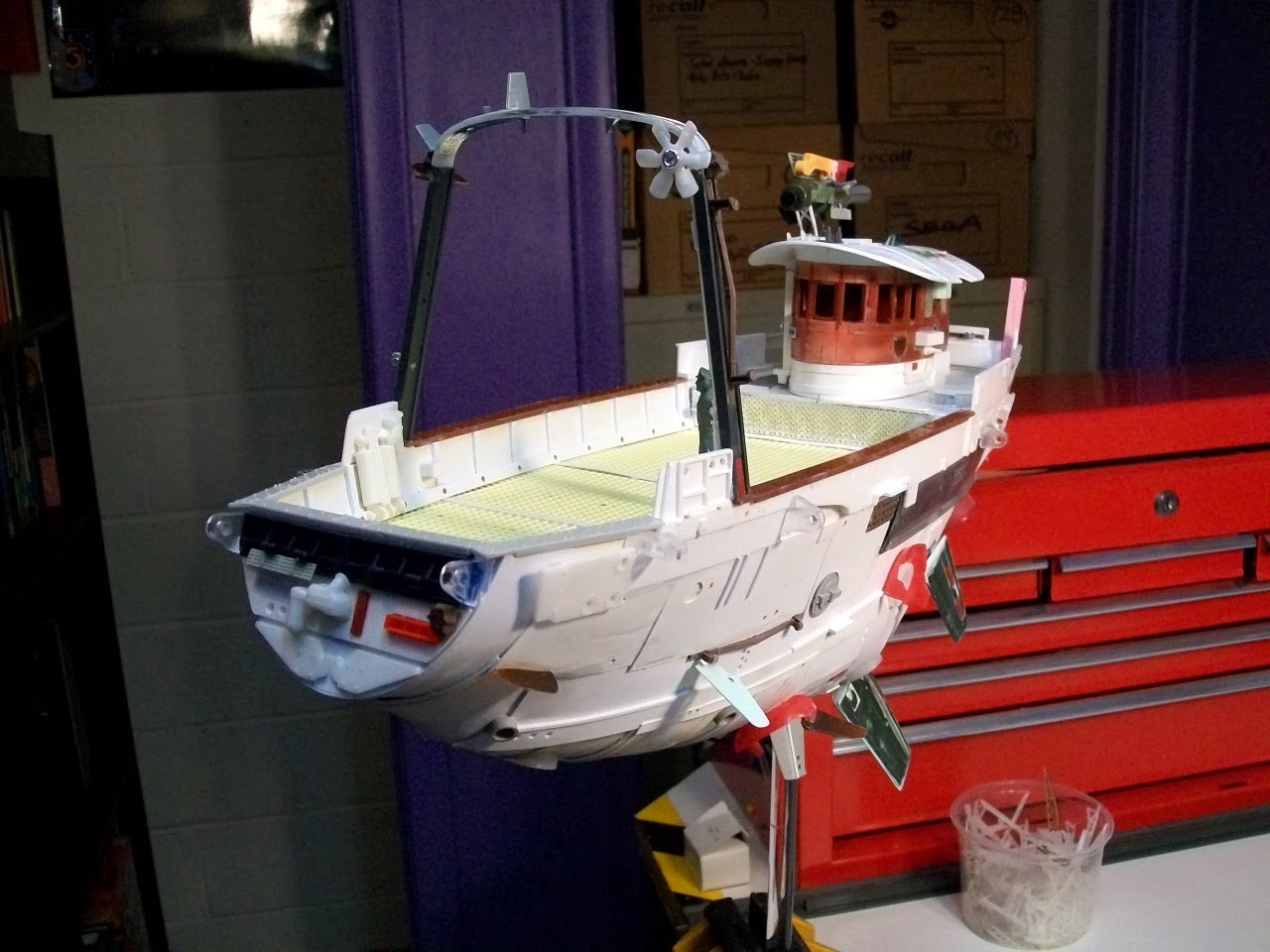 But as you will soon see, the final build is quite different.  Again many weeks of cobbling followed until a final concept arrived.  Now things get interesting.  Painting can make or break a model; it can go both ways.  A layer of primer and then it was weeks of trying to find the right mix of colours (especially tones that go well with rust!).  Many pieces were repainted until the desired look.  Then came detailing, distressing, and (my favourite) rusting and weathering.  Many a brush fell during this phase.  I used several types of paint and pastels for the weathering phase.  Nothing was exempt, not even the crew!  To complete the model I wanted it to be doing something, not just floating.  I built a gantry that the ship is moored to.  So let me introduce the Cargo Barge "Regina". 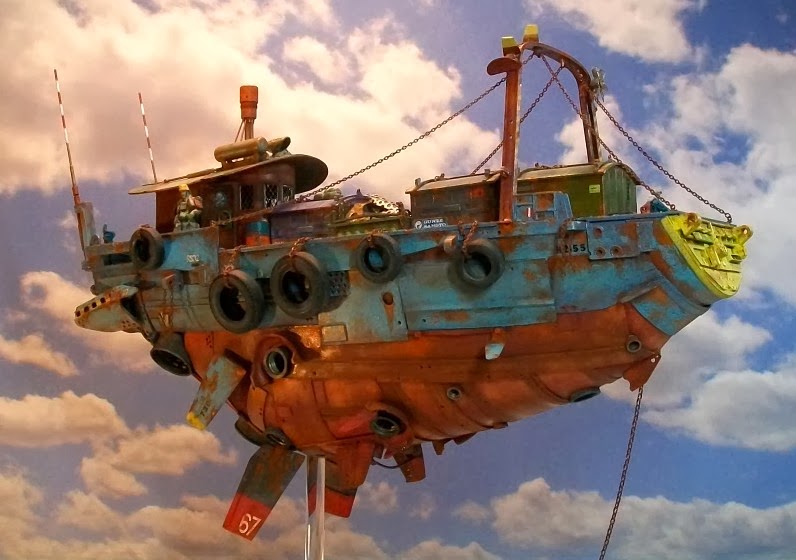 1/35 scale; about 18 inches long, and named after my very understanding and supportive wife.  At least seven months to build, it is actually the largest model I had ever built.  All because I saw an illustration on the internet!  Above is the starboard view; here is the port view... 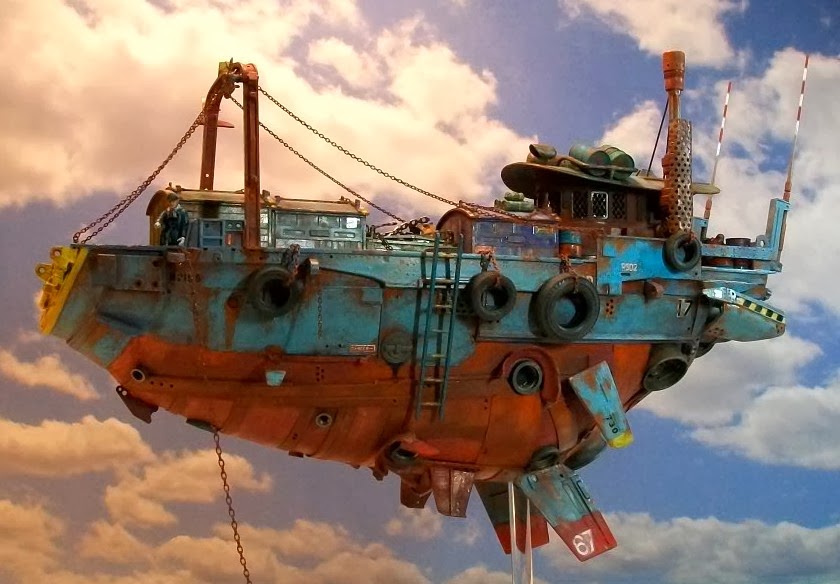 The barge overhead with the gantry (and worker) in view: 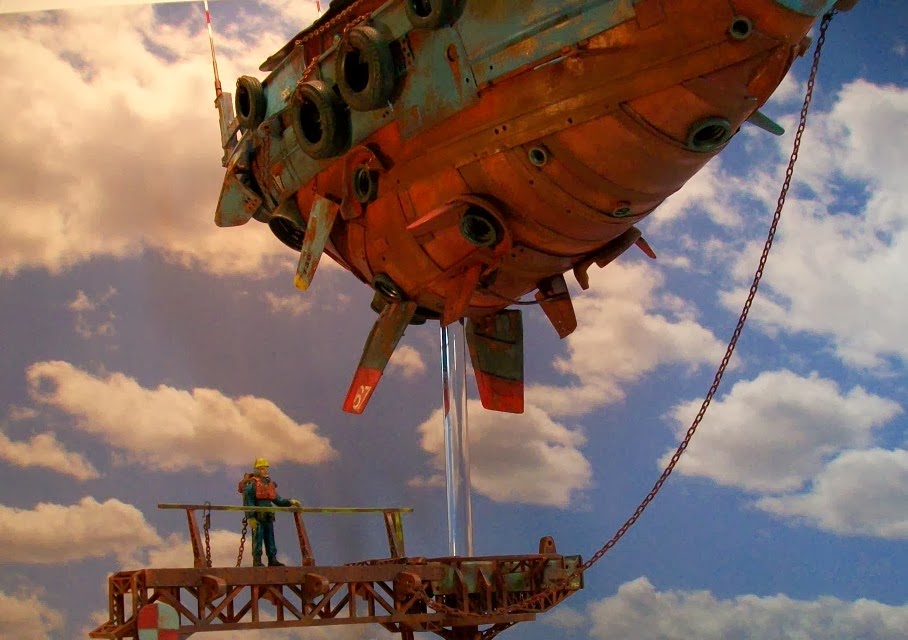 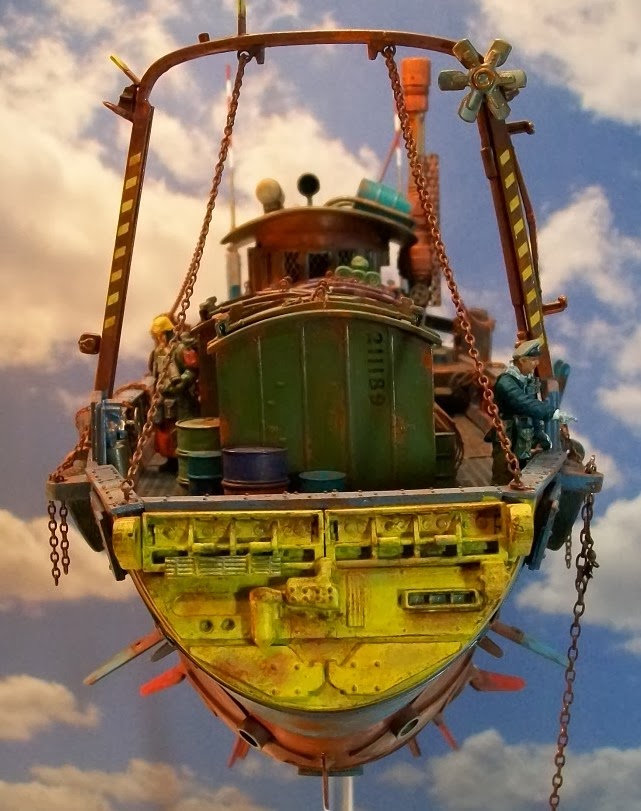 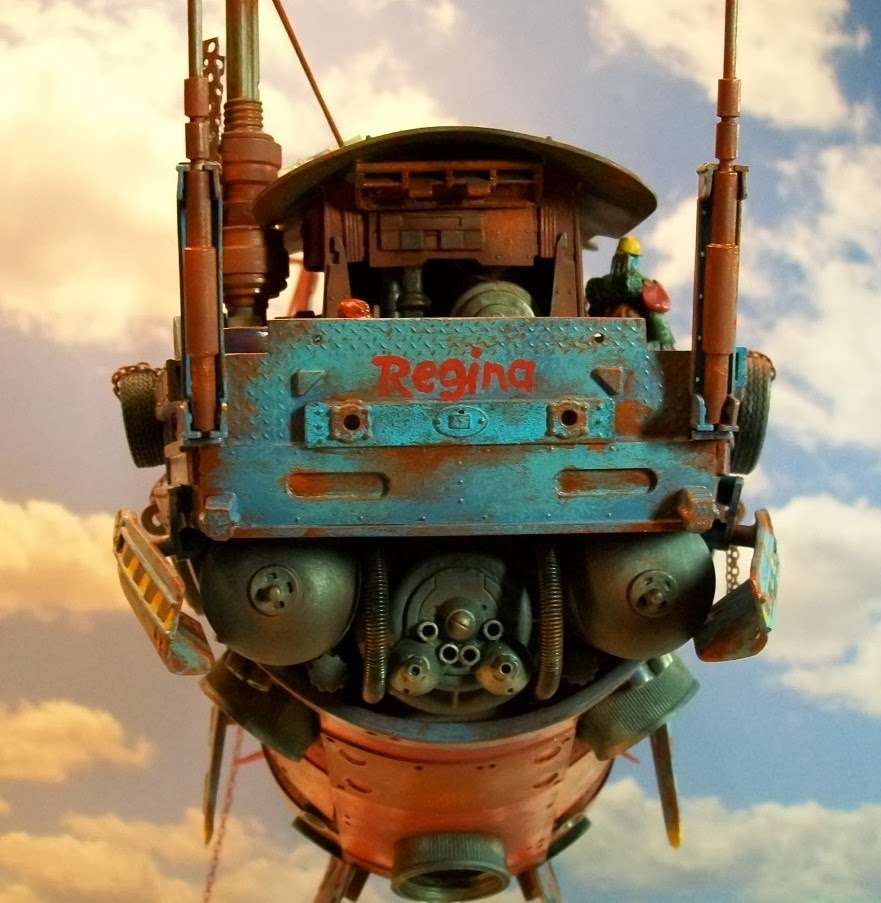 And of course a beauty shot: 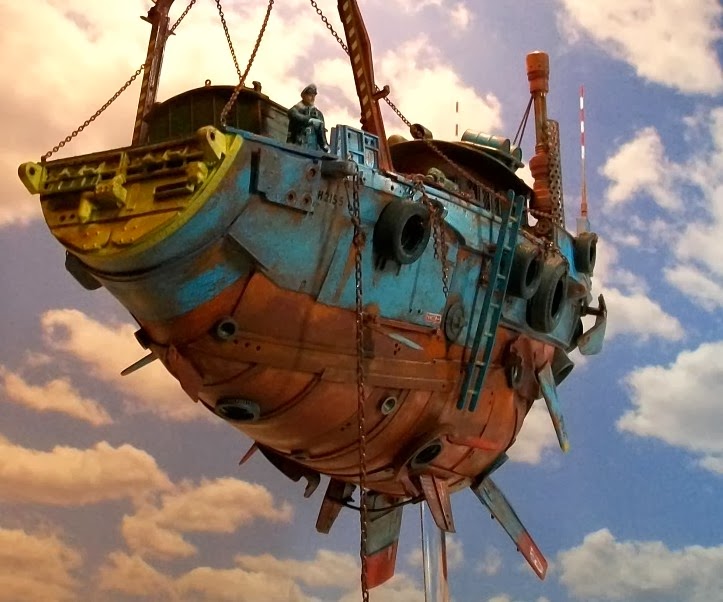 And finally a view of the loaded deck: 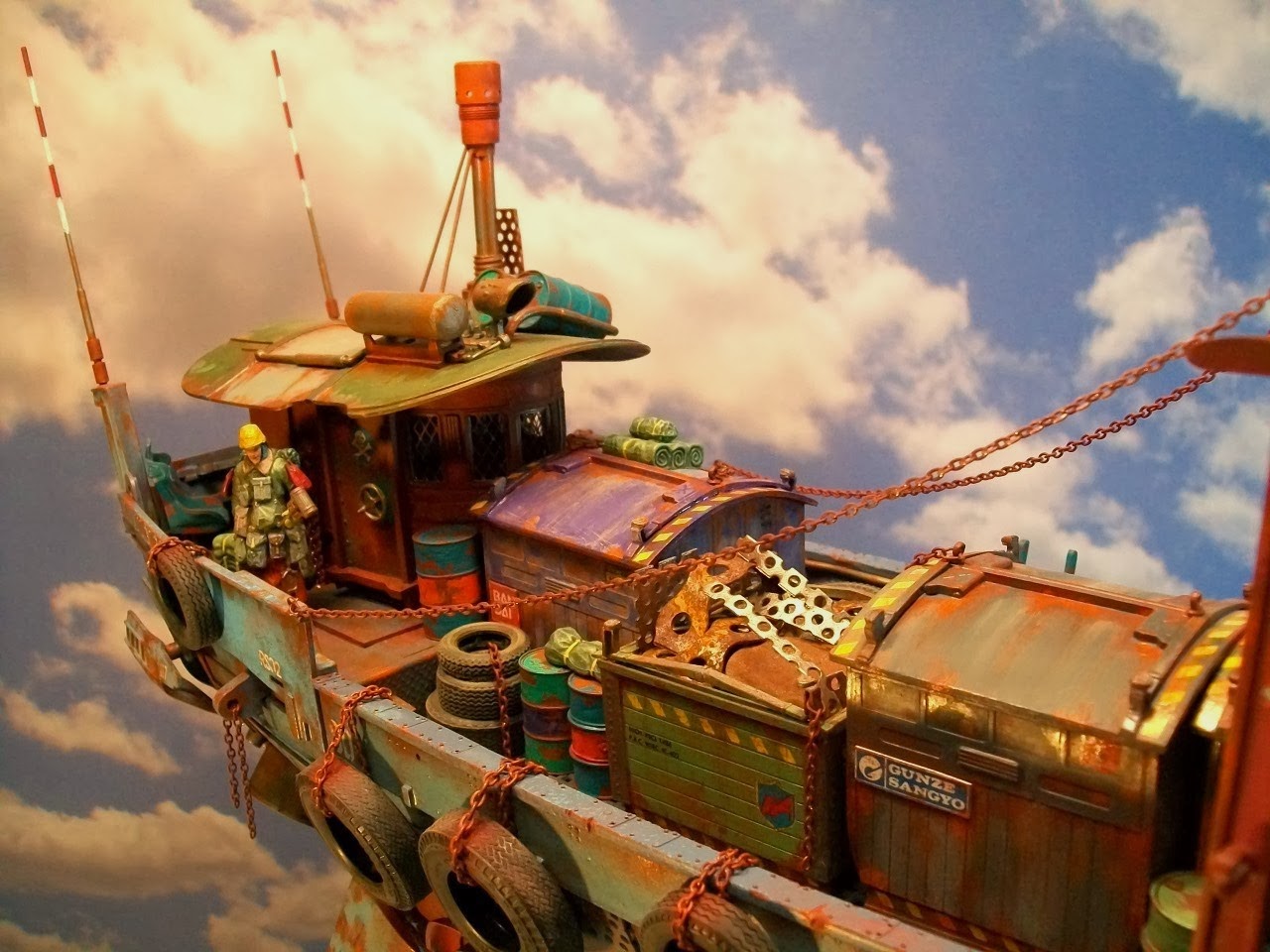 But just the boat couldn't be enough.  There had to be  details on the deck to keep interest.  I left the crew and other fixtures like the cargo containers, oil drums, and tarps loose so I could re position them for different looks.  The ship and gantry also pivot around the central acrylic tube for more views.  Again all fixtures are weathered and fit nicely into the "McQue-verse". 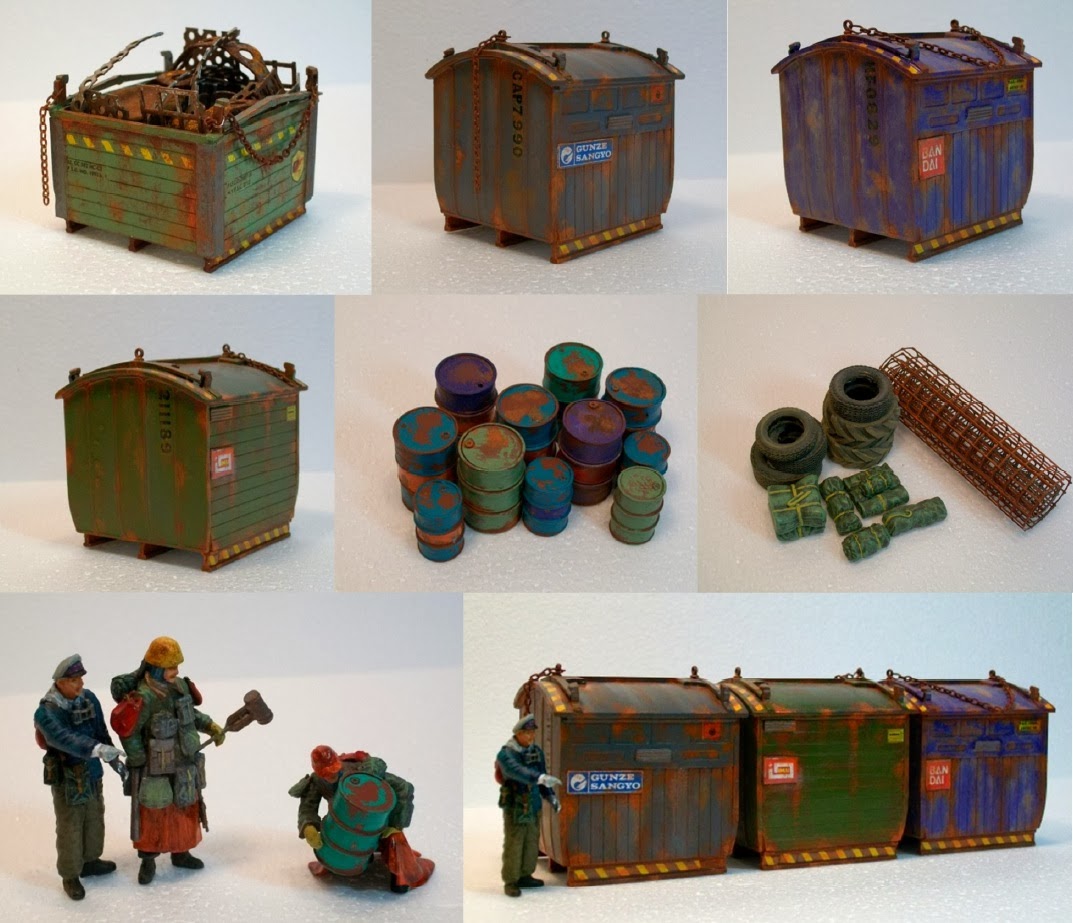 All in all, a very satisfying project.  There are many concept artists out there and I challenge you reader, to take the leap yourself.  Find something you like and go for it.  It is very exhilarating to create a unique model from unique art.  Until next time, Bon Voyage! 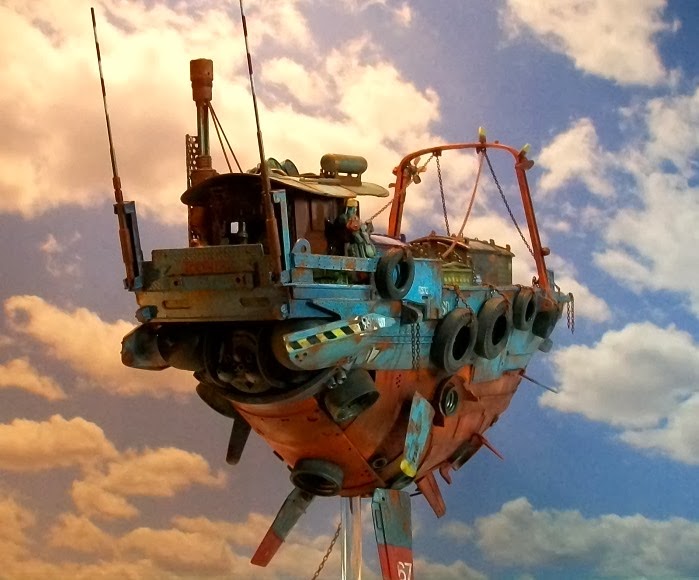