Yes, it's been a while, but the yard is still open for business!  Although I have had no time for personal modeling, I still follow the genre.  Tonight's post is another article featured in the "Special Effects Modeler" magazine from 1979.  (See Scrapbook Yard #5)  This was only a two page feature on a Canadian film, "The Shape of Things to Come" which Brick Price Movie Miniatures was contracted for the model work.  More about the film later, but here is the original print: 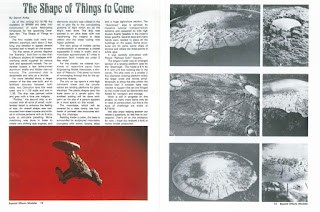 Normally I would end this post here, but in re-reading the article I drifted off and began thinking about the other miniatures made for the film.  I am a little reluctant to admit I actually saw this in the theatre, way the hell back in 1979!  But it being a Canadian film, "The Starlost" had been cancelled 6 years ago, and nothing else sci-fi related at the movies that week, it seemed like a good idea at the time.... 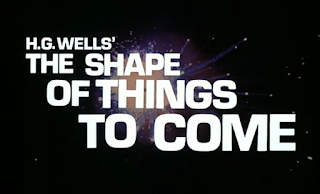 It was the late '70s, 1979, but the actual month is forgotten.  This was originally supposed to be a sequel to "Things to Come", a 1936 epic film about war, famine, and the rebirth of civilization.  (If you have never seen it, I urge you to check it out.  It is one of the ten greatest sci fi films of all time!).  I think poor Herbert George must still be spinning in his grave from this one!  The only real connection are the names of two characters,  evidently descended from the savior of mankind, John Caball.

It's a basic comic book plot with evil dictator on Planet Delta 3 planning on taking over the last survivors of Earth who have retreated to large domed cities on the Moon.  Our poor home planet has taken yet another beating after rising from the ashes, this time a robot war. The population is now dependent on a drug, Raddic-Q-2 which cures the radiation sickness caused by this war.  Unfortunately the drug is only available on D3, so begins our tale.... 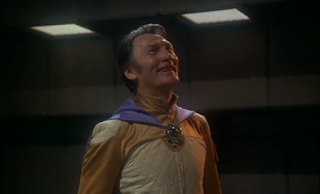 Of course the quintessential baddie Omus is played by Jack Palance.  Who else could pull it off so well?  He has seized control of Delta 3 with his robot army and commands from the massive Citadel. 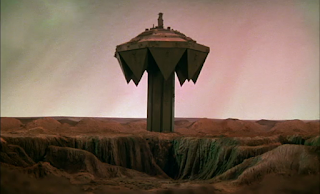 This miniature was about 5 feet tall.  Here is a top view: 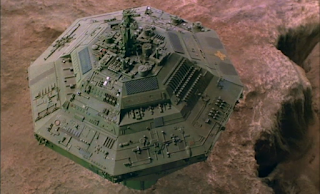 I also remembered this film discussed in another magazine around the same time.  Here is the feature in Starlog #23.  It describes the destruction of this miniature. 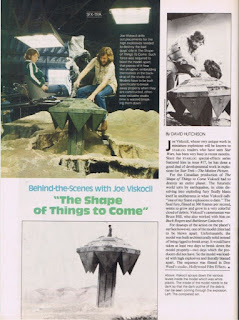 A very familiar actor also appears.  It is four years later and he is back on the moon!  Another time; another place.  I would have preferred him to be in Season Two.  You know what I mean! 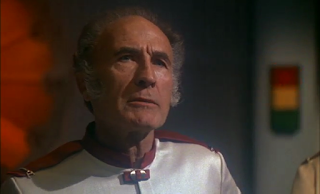 Barry Morse in John Caball, and he is a scientist (again) who has constructed the Star Scream.  This warship is can be seen on the first page with red background.  Here is a screen cap of the rear view: 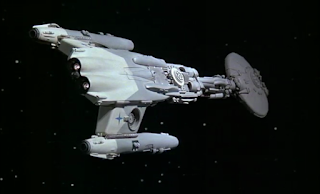 Part of the fun I had watching this film was "shape-spotting", trying to pick out and identify the various kit parts used for the model.  The disc on the front of the ship is easily identified as the central hub from the K-7 Space Station model.  This section can also be separated to be used  to land on other planets.  Behold the image I refer to as "The Project UFO Shot"! 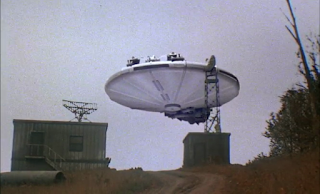 Another shot of the Star Scream on the launch pad of the New Washington moon colony: 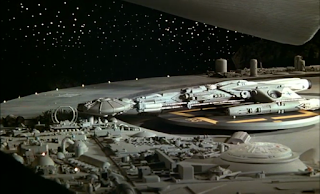 The other major player in the miniature fleet is the Delta Three freighter, used to transport the mineral to the moon.  We got lots of swooping and overhead shots but very rarely was the model in full frame.  Here it is lifting off from the mining platform on Delta 3: 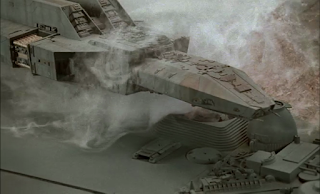 The opening of the film had this ship crash into the moon city dome.  About 15 minutes spent with long swooping shots building up to the impact.  To repair the hole in the dome, the besieged inhabitants send up the repair drones. 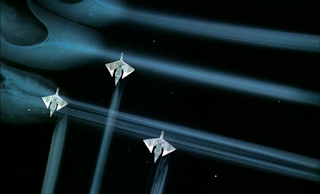 These swan-like ships trail behind them some sort of sealing mist.  Kinda Tholian Web style!  Now I have to mention some other elements of this film not related to the miniature work.  The locations include Ontario Place, which was meant to represent the future moon city.  Many shots feature the pods and Cinesphere (IMAX) as well as connecting corridors.  All external filming for both the radio active Earth and Delta Three were done somewhere north of Toronto.  No distinction between planet locales!  Of course there had to be obligatory robots, especially since evil baddie Omus has an army of these mechanical horrors. 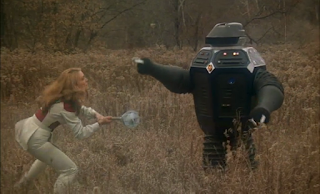 Hard to believe these are from 1979.  I think Robby or B-9 could have taken them out with one claw behind their backs!  Must have been a shock to some hikers or campers in the area!  And thanks ot R2, had to have the cutie robot. 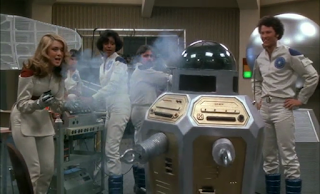 This little fellow was salvaged from the robot who piloted the suicide run at the dome.  They name it Sparx, and it can, of all things, teleport.  Why they never exploited that plot point further I don't understand. 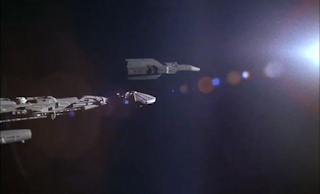 Here is the closing shot where both ships fly off into the "sunset".  If you want to watch the film, I'm sure you can find somewhere on the internet where you can stream.... 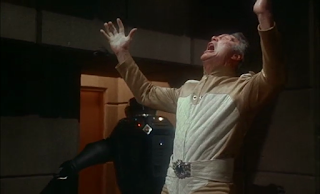 OMG!  I paid real money to see this!  Looking back I think there was only about 12 people in the cinema!  And it only lasted a week.   We didn't have the luxury of Rotten Tomatoes back then.  And if anyone is interested, I have a 27 x 41 official 1-sheet for sale!  Contact me if interested! 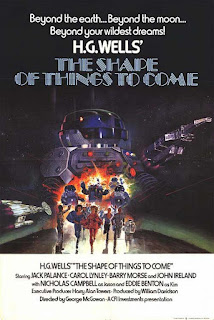 That's it from the Yard this time!