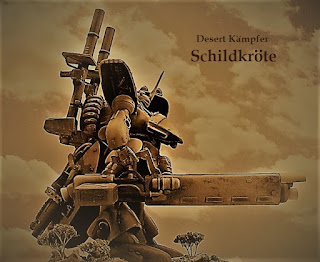 I have been a big fan of Anime for many years, first being introduced in the '70s to a show called "Star Blazers".  Since then its been pretty much out of control, with acquiring many kits from dozens of series.  The franchise know as "Mobile Suit Gundam" began way back in 1979, and still continues today.  Luckily Bandai has no problem with churning out plastic model kits of the many machine variations, so Gunpla (Gundam Plastic) was born.

In the early 80's I became aware of an artist, Makoto Kobayashi.  Not only a manga artist, he is also a master modeler, concept artist, and mechanical designer.  His distinctive style is easily recognizable, most notably in his distorted and bloated mechs.  His work can be seen in many series.  The Marasai, Bound-Doc and The-O in "Z Gundam", his own "Dragon's Heaven", machines in "Venus Wars", and "Last Exiles" to name only a few.  His many models have been seen in "Hobby Japan" magazine, as well as individual publications such as the "Hyper-Weapon" series and "AS Wars".  Rather than do a full bio I encourage you to pursue his work further; there are ample sources all over the internet.

So with Kobayashi on my mind, I looked for a suitable kit to convert and settled on a mobile suit from the 1989 OVA Gundam "War in the Pocket", the MS-18E Kampfer.  Actually a spacey mech, I decided to make it more down to Earth and put it in a desert environment.  So then it was many nights of scrounging for the perfect shapes, and altering the model accordingly.  I wanted this to be a walking battleship of the desert.  Eventually this evolved... 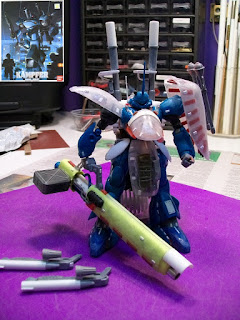 The finishing began with a basic coat of khaki from the Krylon Camo line.  A nice series of paint which dry quickly.  So far it has not harmed any of the plastic I have used and you can paint over it with both acrylics and enamels from several sources.  Thus was created the MS-18SK Desert Kampfer "Schildkrote": 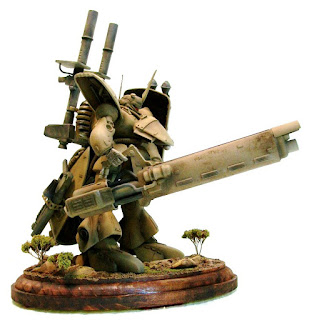 More guns than it can handle, but I use the philosophy of Jayne Cobb.  Start with the biggest gun and work your way down.  Schildkrote translates as turtle.  I thought this very apt because of the nice chunky appearance.  All of the large form shapes are acrylic scoops, spoons and tongs.  Thank you kitchen aisle of the dollar store! 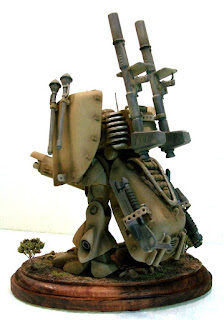 The "radiator" on the back-pack is simply an acrylic honey dripper.  I carefully cut one in half, then quartered it.  There is also the other half under the rear "skirt"; not easy to see in most of the shots. 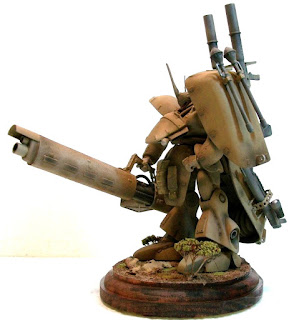 Any of you long term visitors may be wondering, where are the customary Kinder eggs?  They too are under the rear skirt but not so visible either.  After primary painting and accents, weathering was achieved with good ole pastels.  For the final display base, scenery materials, sculptured foam, and some dried Sedum heads for the sparse foliage.  In hindsight, it probably would have been a good idea to put some figures or vehicles in for scale, which is 1/144 by the way... 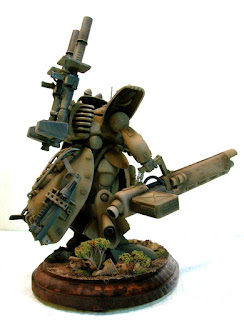 This is definitely not the last of the Kobayashi-influenced mobile suits.  As if it isn't enough, there are also the works of other artists such as Kow Yokoyama (SF3D), and Kazuhisa Kondo.  All with their unique styles.  Retirement cannot come quickly enough!
Posted by The Breaker's Yard at 6:36 PM