Recently I was very lucky at a local second-hand bookshop.  While scanning the many shelves of the sci-fi section and breathing in the aroma of thousands of old musty paperbacks, I happened upon an almost mint copy of "Spacecraft 2000 to 2100 AD", the first in the four book series of the "Terran Trade Authority" handbooks.  They are full of beautiful art tied together with fictional histories.  While carefully reading this gem from 1978, I saw a painting by Bob Layzell on page 53, the "Martian Queen"... 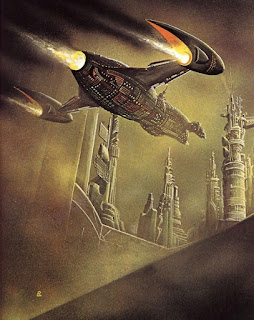 Its bulbous configuration with the outrigger engines was strangely familiar, but I couldn't quite place it, so on to the next page.  The next spacecraft was known as the "Intersellar Queen", and this ship was so impressive it garnered six pages with three paintings, but the one which hit home the most was the page 57 image. 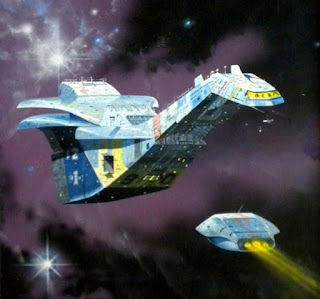 This was by Angus Mckie, another artist I had been quite familiar with, especially with his contributions in "Heavy Metal" magazine.  I had also seen this particular craft in another similar book known as "Mechanismo".  Apparently this ship is known as the 'Hooded Swan', and was used on book covers in the early 70's.  I think because I saw the concepts so close together is what triggered the memory.  Anyone see where this is going?  From the 2002-2003 (cancelled way to soon...) series "Firefly", the ship known as 'Serenity': 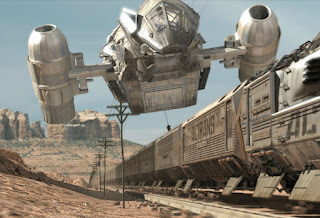 I like this shot because of the anti-grav train...  But it should be obvious now.  Outrigger drive engines, a very bulbous stern, and the very bird-like neck and 'head' of the forward section of the ship.  Apparently Joss Whedon was the primary concept designer for the ship, and I have a feeling he had a copy of the art book maybe about the same time I did. 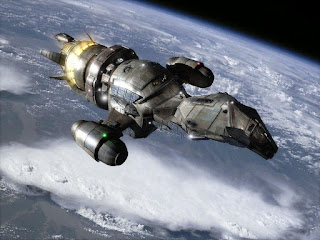 What better 'parents' for yet another iconic spacecraft than from two artists from the Golden Age of British Science Fiction Art!
Posted by The Breaker's Yard at 5:59 PM