Way back in 1978, NBC ran a X-File(ish) series called "Project UFO".  It ran for 26 episodes into 1979.  Produced by Jack Webb (from many a cop show fame...), it concerned two Air Force officers (from Project Blue Book) investigating UFO sightings.  Of course most of the time the end result was the typical explanations of hoaxes, weather balloons and swamp gas, but the final frames gave the final twist of the sighting being genuine.  For the shots of the UFOs, the task went to Brick Price Movie Miniatures, a newly formed effects company (who at the time were constructing the model for the refit Enterprise for the Phase 2 series that never was...)

Early in 1979 I found a magazine called "Special Effects Modeler".  It was published by Price himself and had articles about regular modeling plus the projects they were doing for various productions.  I have never found another issue; I think only one issue was actually printed.  In it was a pictorial feature on the models for the afore mentioned series.  It's a good lesson in modeling on a budget with limited time.  Unfortunately the magazine was in black and white.  So here is the five page spread of various "UFOs of the week".  See how many bits and pieces you can identify! 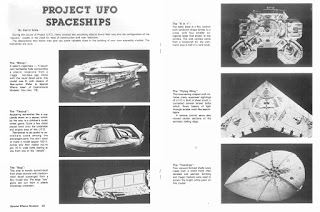 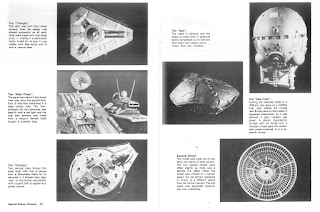 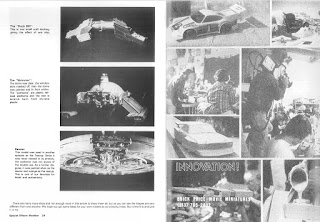 I left that advert of Brick's company in for historical reasons, but I wouldn't call that number.  I doubt it is in service any more!  Lastly, as a newsman in an Artic outpost once said, "Keep watching the skies..."
Posted by The Breaker's Yard at 5:30 PM