So the ship had left Liverpool at approximately 6:30 pm on Tuesday, June 2, 1964.  First a quick stop in Greenock and then out to the Atlantic.  The family has been berthed in a starboard cabin, M115, on the main deck.  It's a window seat!  But more accurately it has a porthole, so we get to see the water and waves splashing at us all during the voyage.

Location of the cabin is shown in this snip from a JPEG of the deck plans.  (I was trying not to use any outside source material for the series, but Mum and Dad never had any plans.  So I gleaned the plans from "The University of British Columbia" online library.  If you would like to see the full image, you will find it here.  Have a look around; there is a lot more to see there!

The cabin had a wash basin, toilet, shower, dressing table, a main berth and a double bunk.  Here's your young author getting ready for the night, whilst older sister "A" gets in some mirror time; she'll be getting the top bunk of course.  The porthole is just to the right of the dressing table, and younger sister "M" is the lucky one to get the crib. 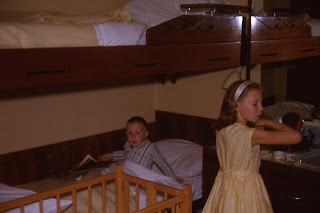 Apparently the family spent the first three days in the cabin for the most part.  Once we got past Northern Ireland, we were met with Beaufort scale 6 conditions; strong breeze, large waves, and white foam crests.  No one was going anywhere or eating much.  Most of the ship was down with sea sickness so it was rather quiet.  There will be more on the weather conditions in a future post.

So finally the sea (and tummies!) have calmed.  We are fit for touring the boat, so here is the family all nice a fresh.  That's me on the left in short trousers.  Mum is in the middle with sister "M" and sister "A" is on the right.  All pretty in pink! 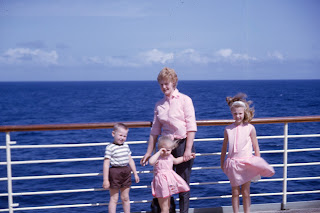 Here's Mum near the deck tennis courts on the Sun Deck, the topmost deck of the ship for public access.  Looking forward you can see the rear left side of the funnel and just the edge of the checkers. 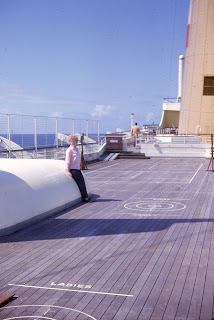 One level down is the Sports Deck.  Here is an aft view with Mum and the 3 kiddie winkies. 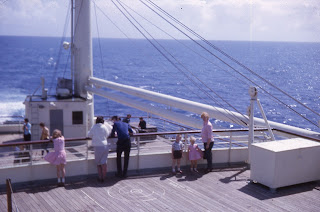 The Sports Deck is also where you would board the lifeboats.  This is a view from the starboard side.  There were only 12 lifeboats; 4 were larger with canopies, as can be seen here.  With 105 First Class passengers, 877 Tourist Class, and 487 staff and officers (including the dancers...) for a total of 1469 souls on board, would there have been enough room?  Woman and children first!  Sorry Dad.... 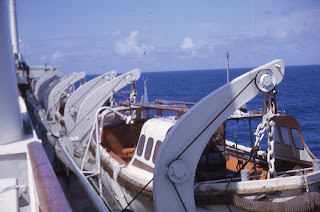 Next level down was the Promenade Deck.  Another aft view of just the edge of the deck.  Yep, England is far behind us now! 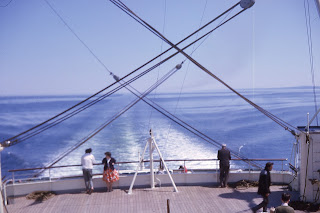 Based on the calmness of the sea, I suspect these photos were taken well past the point of no return and we very close to Newfoundland or even already past entering the St. Lawrence River.

Surprisingly no photos were taken inside the ship, and the few I have here all taken in what seems to be the same day.  But there was more to do than walk the decks and keep an eye out for icebergs.  Next time we will discover what was on the menu to keep us all fed, when we could keep it down that is!
Posted by The Breaker's Yard at 6:19 PM