Welcome back to the middle of the Atlantic Ocean, readers.  Tonight we have a look at the culinary choices offered during the voyage; Breakfast, Luncheon, and Dinner.  Plus a few extras as well.

The few menus Mum managed to save were from the latter part of the journey.  That I believe was due to the lack of any food remaining in our collective stomachs for the first three days at sea, as was mentioned last post.  But we are hungry now so let's start with breakfast!

The only breakfast menu here (as was all the menus) were on heavy card stock, all printed in Britain.  The offers for the first meal of the day for June 7, 1964, was on this 7" x 11" card.  Also, all menus had a colour illustration of a mode of transportation, plus the Canadian Pacific logo as well. 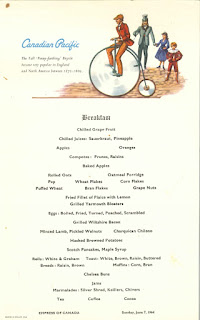 Some unusual items here....  Never heard of Sauerkraut juice, but apparently it is good for digestion; probiotics and all that stuff.    Plus I had never heard of Charquican Chileno.  It is an Argentine beef stew topped with an egg.  No Weetabix, and without spam, no chance for a Sunday fry-up!  But it is only a few hours to lunch...

The menus for lunch and dinner are now folded cards, with outer cover again with an illustration and logo on the back.  The flat card is 9" x 6" 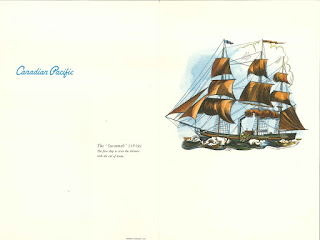 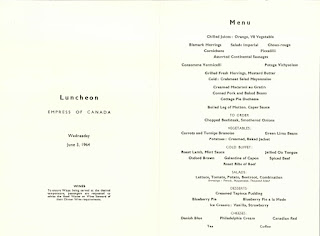 More heavy eating by the looks of it.  I guess the idea was to fill us up so we would nap for most of the voyage!  A big breakfast and now a big lunch.  Maybe dinner will be a little less food.... 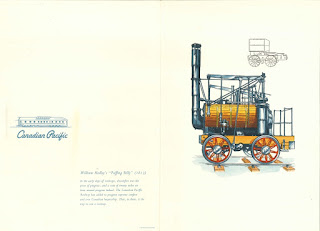 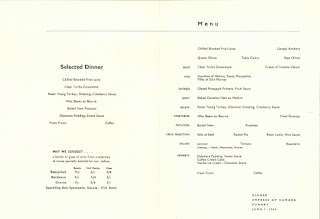 Another meat heavy offering, and that Turtle Soup?  That is disgusting!  I just hope I had salad and ice cream!  The menu for June 8: 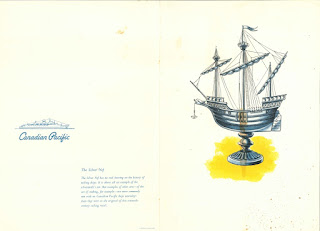 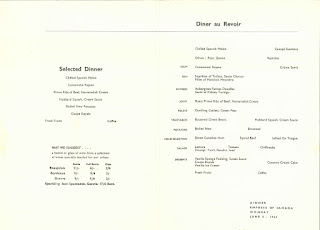 Fancy chicken soup.  I'll have spuds and beans please.  Back then I don't know how much flexibility there was with the choices.  We didn't have peanut allergies back then, or never heard of gluten-free or vegan.  Basically growing up, it was eat what was put in front of you, or you're getting it for breakfast.  I am sure this philosophy was not suspended for "eating out".

Of course no sea voyage is not complete without the Captain's Gala, when everyone wore their finest clothes they had for the trip and had a formal dinner.  This took place on Saturday evening, June 6, 1964.  I am almost certain us kiddies did not attend this event.  We were probably left in the cabin with a bag of crisps.

The Gala menu card was the largest, 10.5" x 8".  Not a transportation lesson this time but a Medieval theme depicting much gluttony. 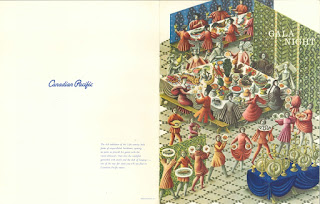 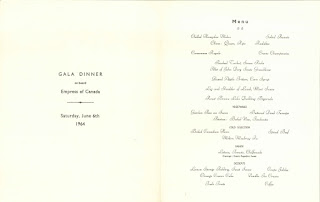 Same offerings, just with a fancy type face.  I never did find out if you could get seconds....

Now let us examine the scenario.  Mum and Dad travelling across the Atlantic for 7 to 8 days, berthed with three kids, ages 3, 5 and 9.  And not much to do...  Yes I would like a drink!

The Bar Price List was the most worn and used menu in the collection.  Folded in half, I believe they must have carried it around for the duration of the trip.  I don't blame them; I'd be spending a lot of time at the bar too!

This 8" x 7" card had the same painting of the "Empress" as the Passenger List booklet did; slightly larger.  The back of the card was the price list. 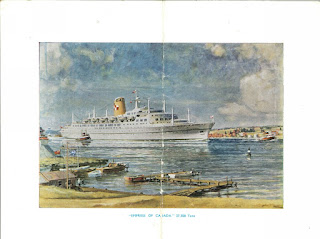 Not only drinks, but you could also get smokes.  I identified a total of four bars on the ship.  Everything on this list is extra; no alcohol was included in any of the meals.  It took a bit of detective work to figure out the price list.  It is in UK currency before decimalization; Pounds, Shillings, and Pence. 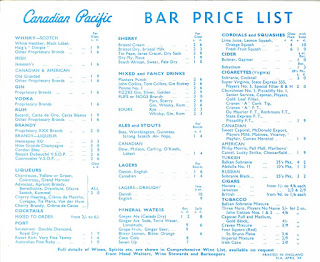 So for example say you wanted Gin.  That shot would cost you  One Shilling (s.) and Sixpence (d.).  Which translates to our present (Canadian) as roughly $2.25.  Not much at first but don't get carried away buying rounds for the officers!

So no one is going to go hungry.  This trip will not degrade into a "cannibal cruise"!.  I am sure there were other places to get snacks at the shop, and off hours at the clubs and lounges.  But I doubt they would have served an unattended 5 year old !

So can I be excused from the table, Mum?  I'd like to go play games on my phone...  Not bloody likely!  This is 1964!  So what does one do in these no internet, no Wi-Fi dark times?  Find out in Part Five of the voyage!