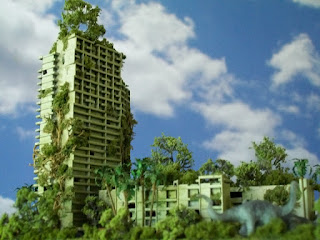 Time to take a break from the ocean crossing...  Been trying to get a model done for almost two years now.  Success, but only a small one...

As you holder's of Pinterest accounts will know, you get a barrage of emails on a regular basis with such titles as "We think you might like these pins" or "We found some boards we think might be right up your alley", to name a few.  One time it actually came true, as some images of model buildings all done up nice and post-apocalyptic with nature taking back.  Some are even semi-submerged with aquatic creatures suspended in the translucent resin.  "Hell, I can do that." I said to myself.  Intrigued, I hunted down the modeler's website, and eventually found the blog "Kinagawa Masaki's Model".  Check it out if you want to see more of his work.

Long time followers of this blog know I do engineering modeling by day.  Not just computer but good old hands on crafting.  Scale models are required for the building performances and sciences, and are usually created in Stereo Lithography machines from computer files.  In some cases after the completion of the project, the client will request small models for their personal use.  These "mini-models" as we call them are integrated onto a base with the names of the building and our firm, and are grown at 1:1000 scale.  Luckily about the same time I found that website, a spare mini model from an old job was going begging.  (Thnx Jake!) 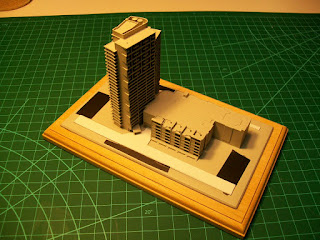 This was supposed to be a condominium in Florida, but sadly it was never built.  The dimensions are 4" x 7" on the base, with the tower being only 4" high.  (I have blanked out the various names and organizations involved for obvious reasons).  It was glued to a wooden base and modeling began.  At this scale my eyesight was going to get a workout! 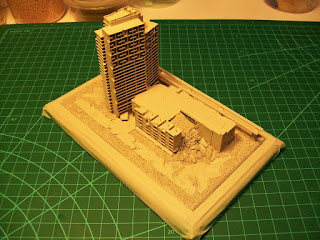 I started by adding a road out of stock styrene and then distressed it using a rotary tool.  I also carved out chunks and cracks in the cladding and drilled out holes to indicate broken windows.  I then "excavated" two areas for water features.  The largest was to be a sinkhole which would account for the collapsed section of the parking structure.  I used slabs of styrene plus gravel and some screen to simulate the rebar.  On the other side I decided to put in the Metrorail line, even though technically it wasn't there in "real life".  But neither was the condo.  All the other exposed ground was then covered in fine sand, and then the model primed. 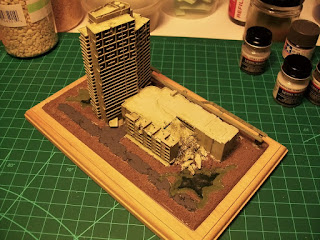 Lots of painting followed with various brands in both enamels and acrylics.  The ponds were painted dark green for depth while the condo was painted in several subtle shades of greys and buffs.  Of course you can't have a road or monorail without vehicles, so taxing my eyesight further I made some trains, cars, and a few semis in 1:1000 out of styrene. 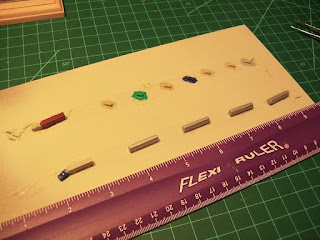 Not very big are they?  After painting I used a very fine black marker to represent windows.  They were then attached to the base erratically to await the final weathering.  But before this it was many nights of flocking and "planting" trees.  Eventually, the finished product... 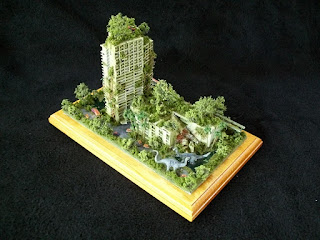 Much of the model is now covered in various textures and density of green, but before I started the process I did a wash of Vallejo medium slime over the whole building. Grass and shrubs are mostly coarse flocking and foam, while the larger trees are "recycled" trees from work which can no longer be used for tests.  I scrounge for everything! 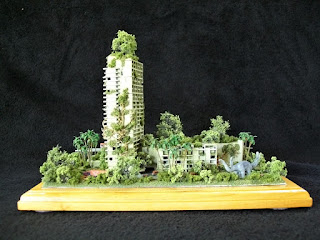 Several groves of palm trees are included (I tried to keep them to scale), and also "planted" some large vines growing up the sides of the tower.  There are some other vines but are hard to see due to the other greenery.  Rogue gardens are also sprouting from various balconies. 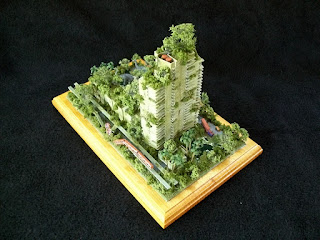 The mechanical units on the roof got a dose of rust as did all the vehicles and rebar.  Couldn't have that monorail intact.  Got that inspiration from all those nights roaming the "Capitol Wasteland"! 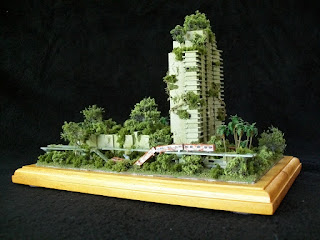 I think "Logan's Run" was the first time I remember (perhaps first time in the cinema?) to feature the Green Apocalypse scenario.  All those beautiful Matthew Yuricich matte paintings. Quite commonplace now especially with games like "The Last of Us" and the real life location of Pripyat. 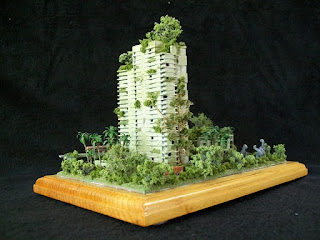 For additional interest I decided to add a dose of "Simon Stalenhag".  Needed something in that sinkhole.  Originally I was going to put in alligators but at that scale they would have been fairly small, so a larger beast was chosen. 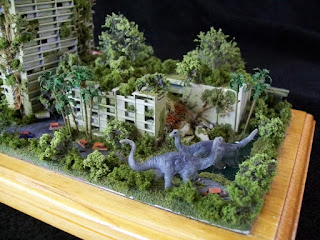 I used Woodland Scenics Realistic Water for the ponds.  As the main sinkhole was supposed to be deeper, I filled it in with the resin while the Brontosaurus was in the middle.  I found these little guys in a hobby shop, which then helped to create the title for the project.  Guess someone at that safari park left the gate open... 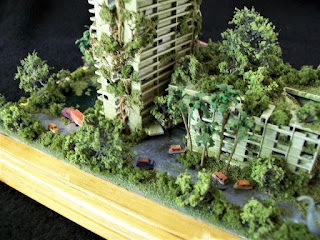 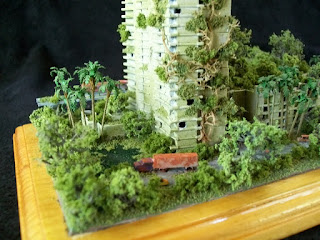 From these two views you can see the "finished" cars and truck.  I decided to use only one semi to keep the road less crowded.  Makes it more unique too.  And here again is a shot to remind you just how small this miniature is... 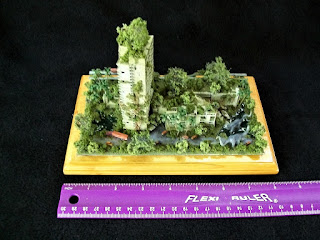 This took about a month to do.  Mostly an hour every evening when possible and hoping it would rain on weekends!  In closing here are some more blue sky shots. 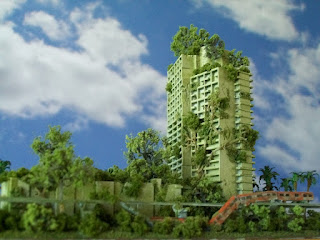 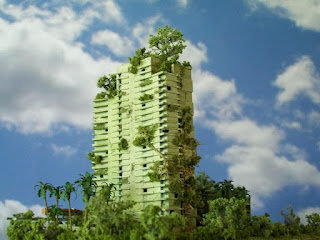 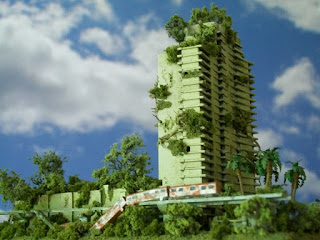