For this project I would be stepping out of my comfort zone.  My Father-In-Law, who from here on in shall be referred to "Mr. H", asked me to help him with one of his models.  Brief back story: Mr.H models the Deutsche Bundensbahn  in HO scale (1:87) and his long time layout fills most of the basement.  A huge layout with much interest which can keep five operators busy for hours!  So when he wanted to renovate an older area on the layout with a new industry, he asked me to paint the model for him.  The industry decided upon was a Cement Factory, so he purchased the "Old Time Cement Plant" kit from Faller.  That was the easy part. 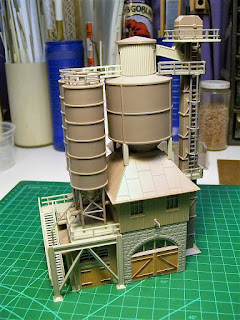 There were several parameters to keep in mind for this "commission", and a few difficulties to overcome.  The first being that, in all my years of modelling, I had never built or painted a structure.  Sure, lots of spacecraft, armour and sci fi mechs, but no buildings.  The second was that the model had already been assembled, so I had to work around that as best I could.  The most important element I had to deal with was that Mr. H is not as big a fan of weathering and rust as I am, so I had to dial it back but make the model look "lived in", as an industry such as this could not be totally clean! 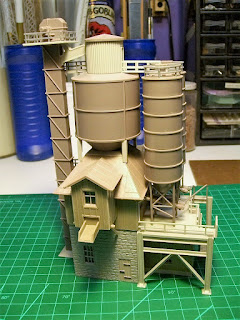 The first thing I proceeded to do was spend many hours researching painting techniques for the various materials on this structure, which were many.  The building has masonry, steel, wood, and other metals.  I had to consider what the time period for this was as well.  What did we do before YouTube! 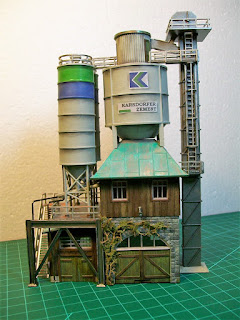 So there was the final product, after many hours of painting, dry brushing, washes and pastels.  For the stonework I started with a basic grey, and then painted individual stones in other tones of grey and some brown.  This was followed by a dark wash to bring out the mortar.  There was also some dry brushing and pastels used for accenting and highlights. 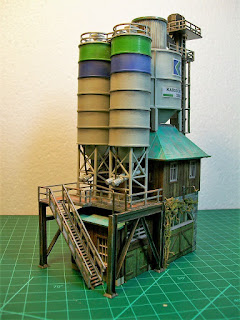 There was lots of wood in the structure.  Wooden doors and the main building itself.  For that I used a dark brown base and then dry brushed on various shades of brown and tan, also doing some areas lighter and some other planks darker.  For some variety I thought the doors should be a different colour so I used various shades of green over a dark brown base.  Again just a slight hint of weathering and use of time, but no peeling paint or alligator textures. 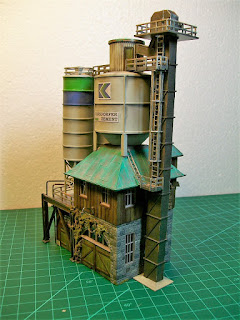 The roof appeared to be made from metal sheets, so based on the period, I imagined them as being made from copper.  I used a base coat of a few shades of copper, and then dry brushed on an emerald green acrylic to simulate the patina effect. 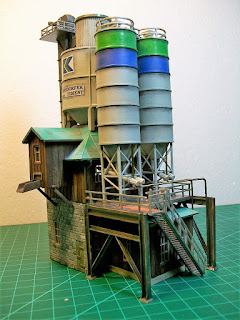 The rest of industry is steel or ironwork.  I painted those in various shades of steels, and used dry brushing of silver and aluminium to highlight the edges.  Since all the walkways were steel, and we can assume these areas would be well traveled, I dry brushed and powdered various shades of rust for the wear and tare.  There are other metal details such as piping and light shades, which I used some bronze and other light metallics.  What remained now were the silos. 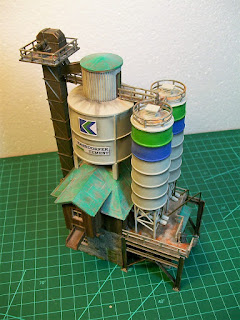 Those I painted various light greys, again avoiding too much distressing by just lightly using dry brush and powders to bring out the details.  For the corporate identity, text, and colours on the silo, I referred to some cement/silo wagons Mr. H already had on the layout.  I took a photo of the wagon and made the signage in Photoshop. 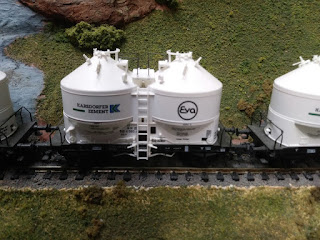 The final effect I wanted to add was some greenery around the foundation, so I did some subtle mossy green wash and fine flocking.  I thought it needed something a little dramatic, so I "grew" a vine to frame the main doors.  This vine was achieved using some coarse lichen and flocking.  I think it is one of my favourite features of this project! 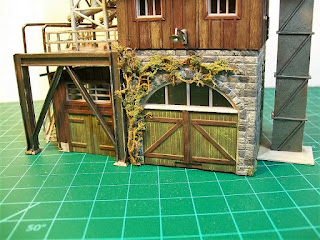 So that was my contract completed.  I learned many new techniques and found I was able to keep the weathering demon under control.  It is now up to Mr. H to install this building on the layout.  Happy to say he was very pleased with the results, and here is the satisfied customer to prove it! 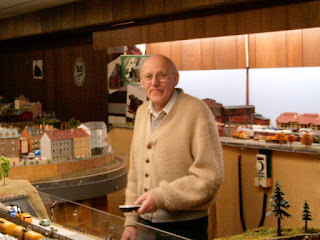 And my commission?  Coffee, cake and unlimited operating time!   Now for some "Where's Waldo".  Here is a long shot of the main section of the layout.  See if you can find that building... 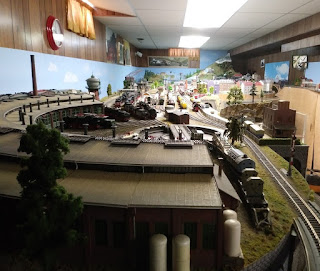 Next time, back to the Atlantic Ocean!