The influences for this latest project are probably obvious to most of you.  It did not start out this way though.  I was rummaging through the many boxes of kits with no inspiration or direction and also having several false starts which ended as quickly as they began.  I happened upon a kit from the early '80s from the anime series "Dorvack".  The majority of the models from this series consist of powered armour suits in 1/24 scale, but there are a few in 1/72 scale of the baddies.  I chose the Idelian Cangrid Harbla, a nice little model from Gunze Sangyo. 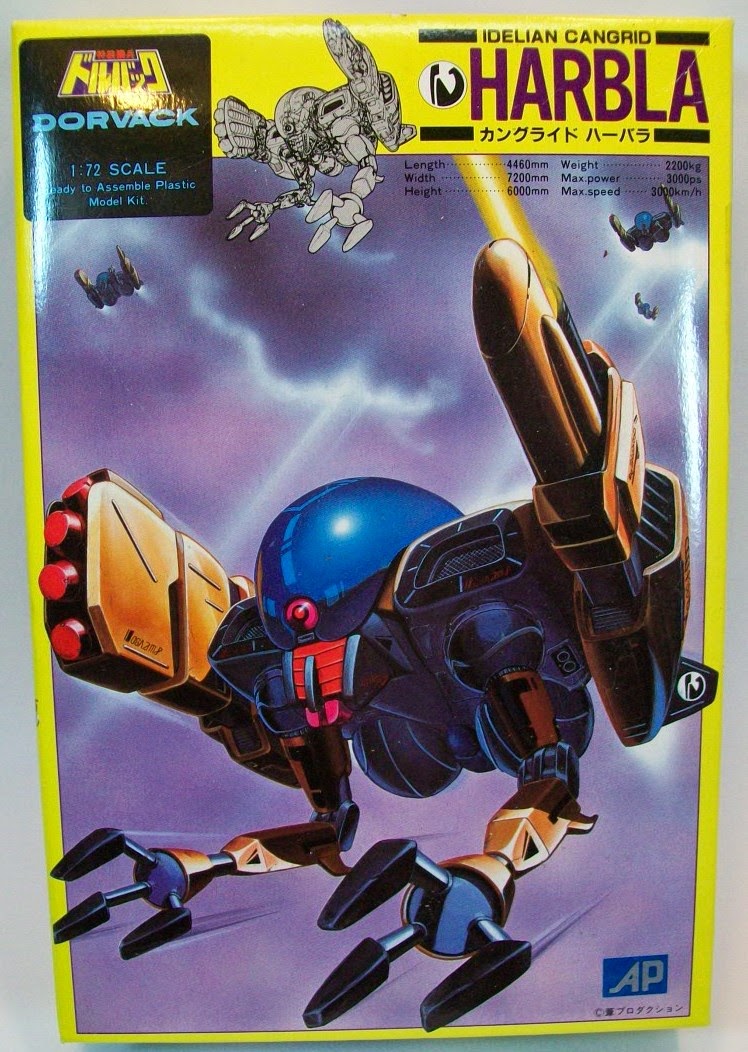 Once the final choice had been made, the ideas began to formulate.  I had recently seen "Terminator Salvation" so I decided to go this route.  Besides this film, there were of course the other "Terminator" films, as well as the anime series "Gall Force: Earth Chapter", and a short CG film called "Ruin".   It was just modeling after this point.  The Hunter-Killer unit was mostly straight out of the box with some modifications and additions. 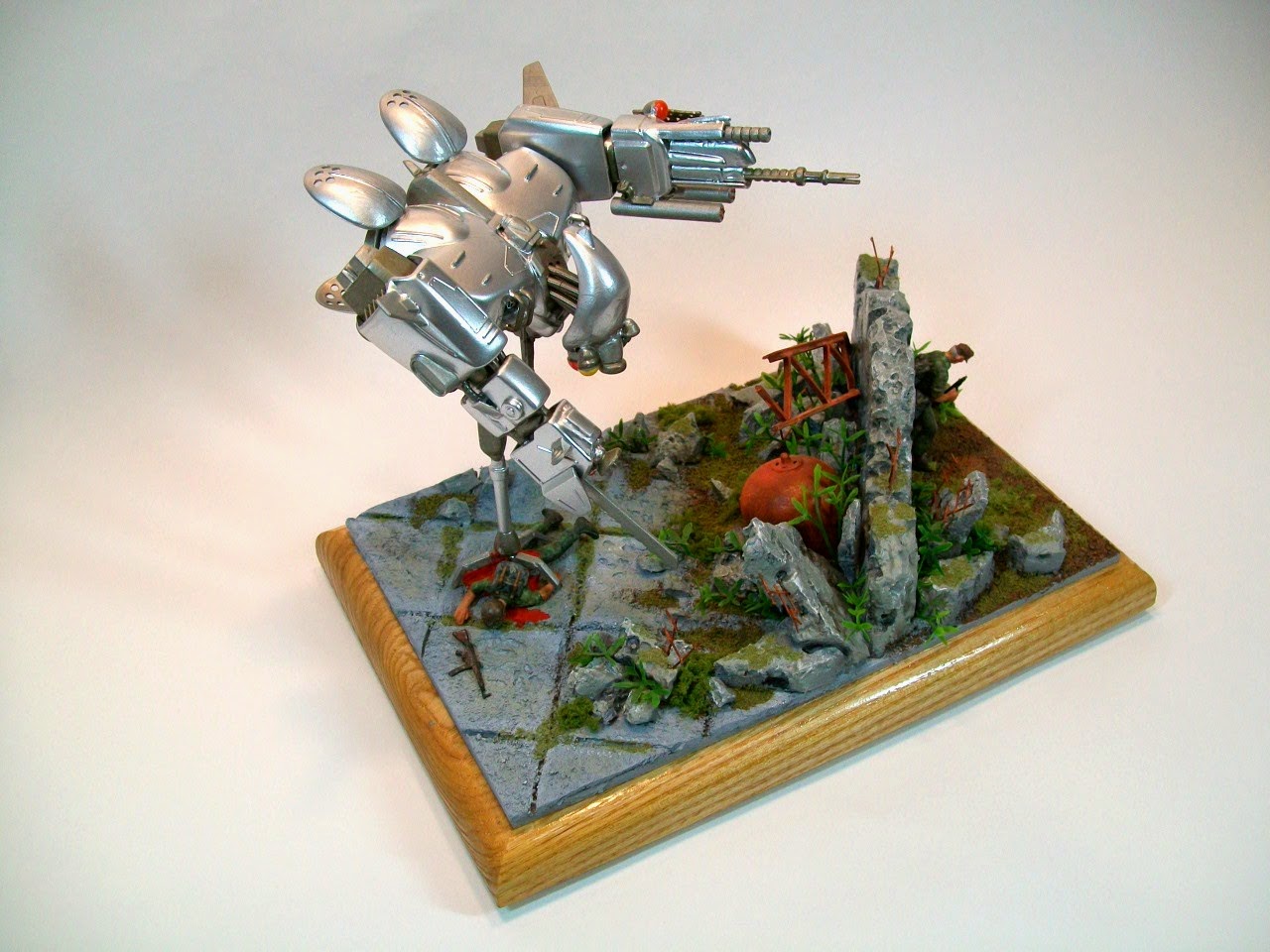 I replaced the provided rear domes with boosters, added fins, more electronic eyes, and specific weapons packs.  The right "arm" is a single function blade (for close encounters!), while the left is a multi-gun system with laser, rail gun, missle launchers, and machine gun.  (That array has Zorg Industries written all over it!).  There is also a mini-laser under the "head". 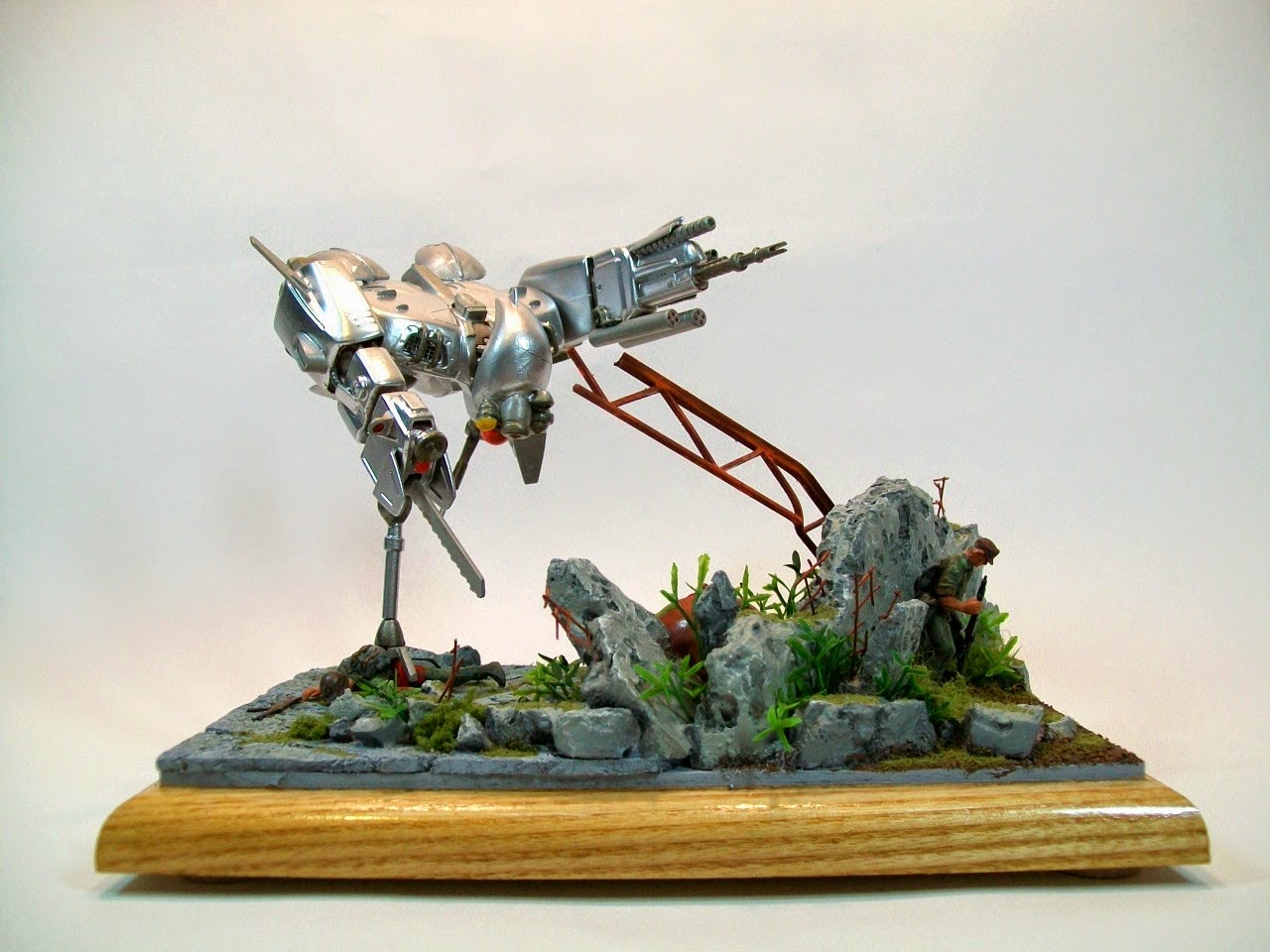 I decided not to do any weathering or battle damage on the "bumble bee" this time around.  I wanted to convey the idea that the machines are winning this one, with new units being constantly constructed out of some exotic alloy.  And even though the H-K has many available weapons, it still prefers a "hands on experience" to dispatch the enemy.  But now it has blood splatter all over it's shiny new talons! 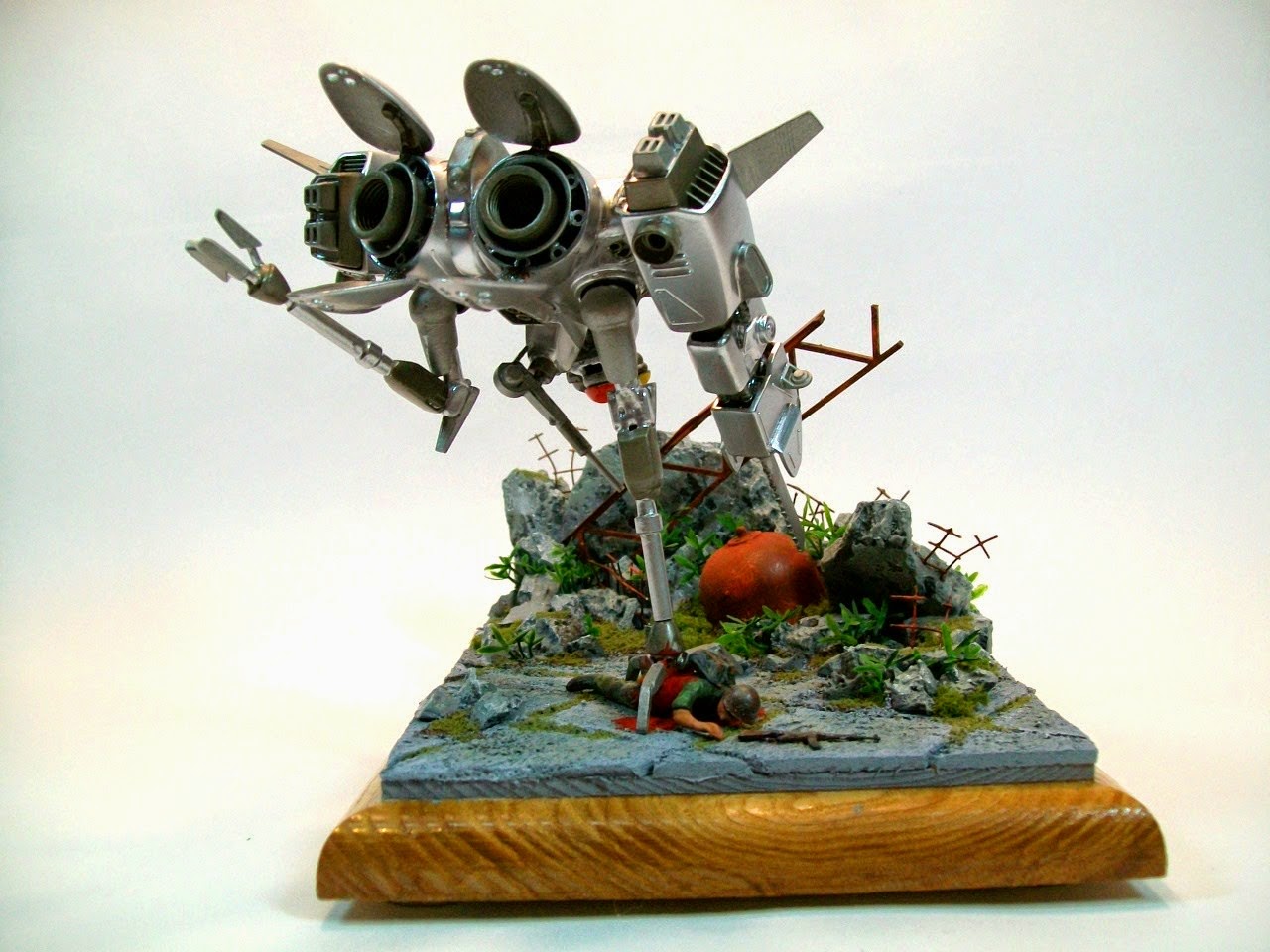 One nice thing about the "Dorvack" kits is the available mobility of the model after construction.  The weapons pods and legs are movable, and since the talon is fixed to the base on a metal rod, it can also rotate around the freedom fighter for different views. 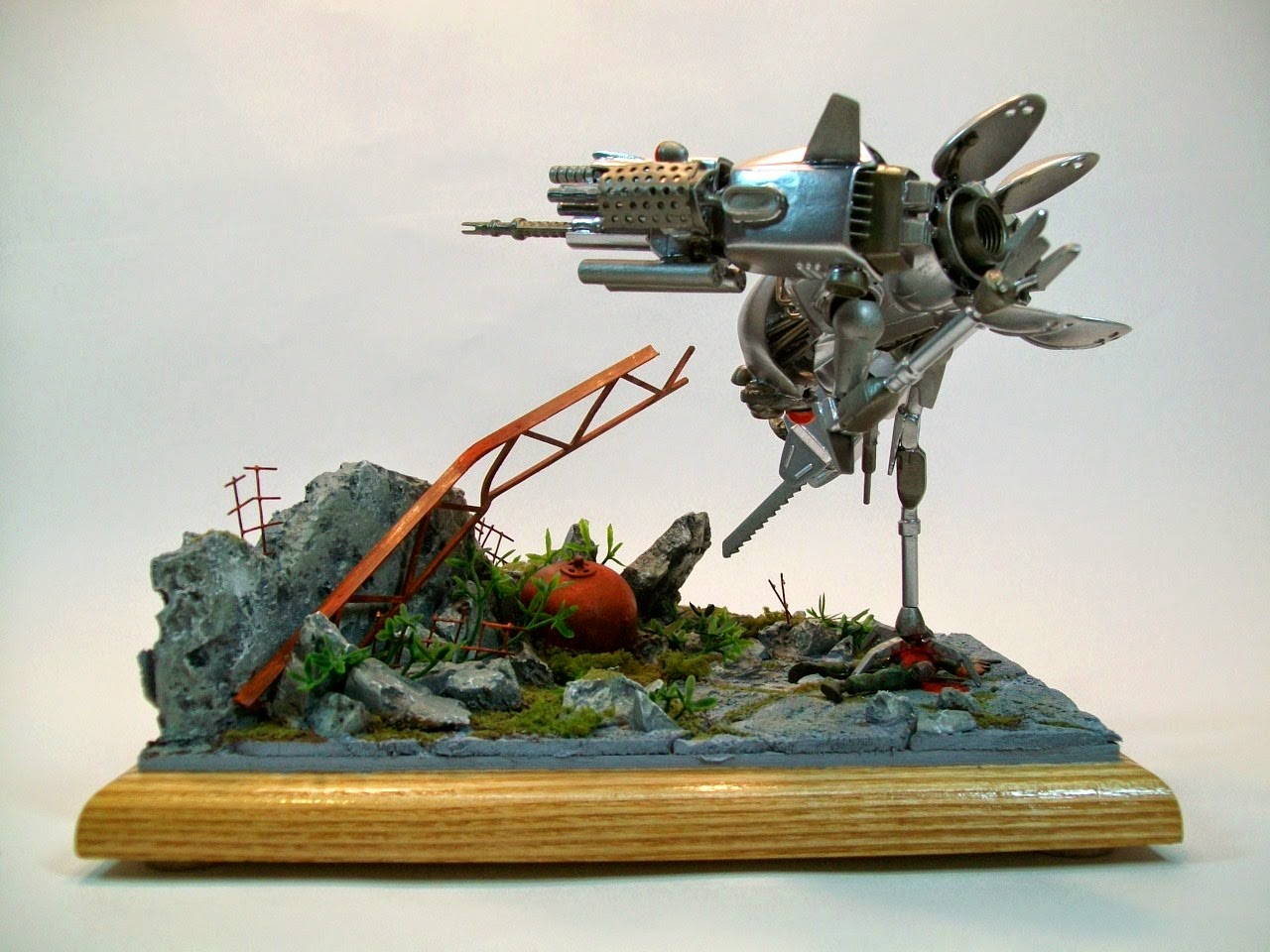 The base was designed to give the opposite effect of the kill-bot.  Some rusty remnants among the rubble, with nature reclaiming the land.  The wreckage are just shapes and screen (the ever present egg...) painted red oxide with various shades of rust effects using dry-brushing and pastels.  The pavement and rubble is just dense blue foam molded and again brushed with various shades of greys.  Then I added various scenery materials for the vegetation. 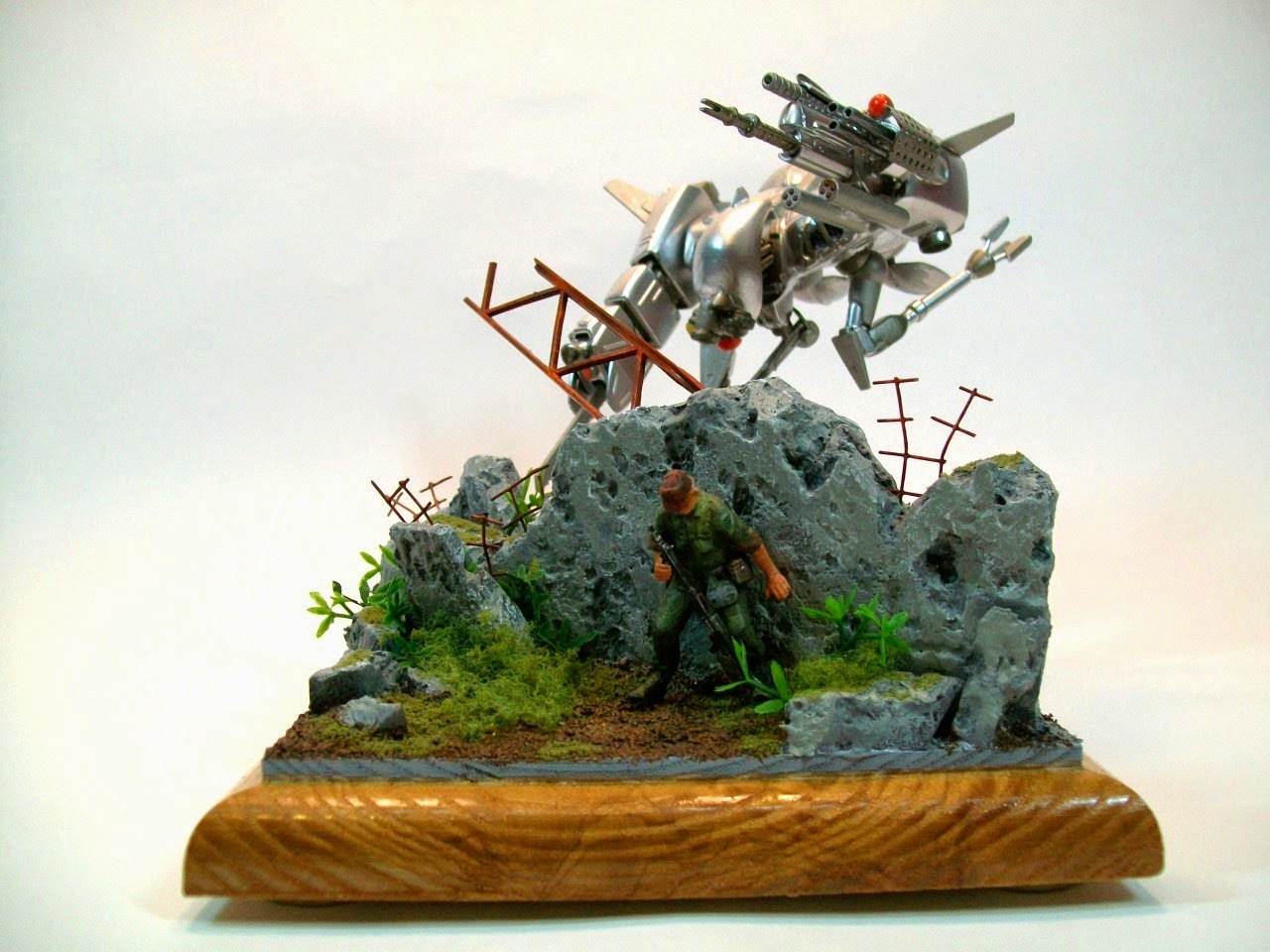 The two figures are 1/35 Tamiya modified to fit the scene.  Our brave "hero" has decided that discretion is the better part of valour, and when being chased by a flying hunter-killer unit, always remember you don't have to run faster than the robot, just faster than the other guy! 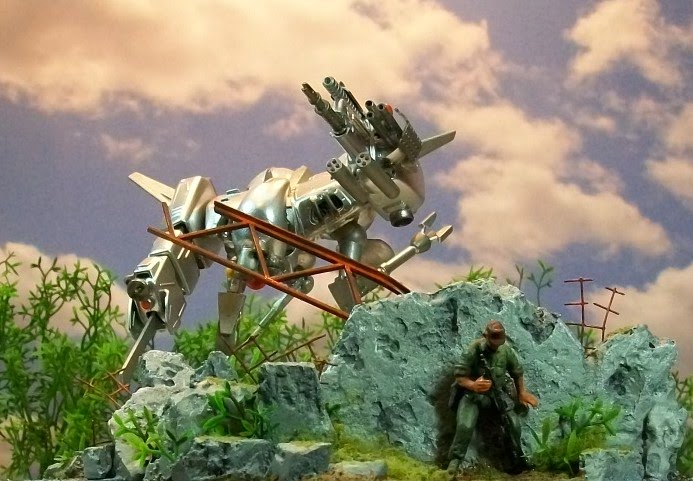 All in all a very enjoyable project.  Simple yet it nicely tells a story of man versus machine, and this time there isn't going to be any time travelling rescue of future leaders.  Just hope for an aluminium shortage!  For the present, just keep your eyes on that Honda robot.... 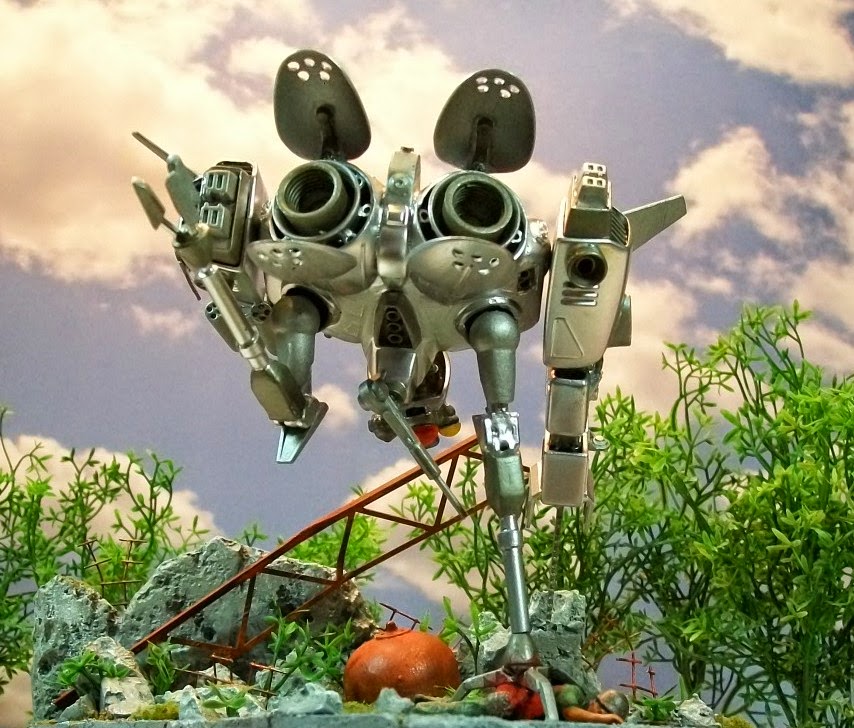 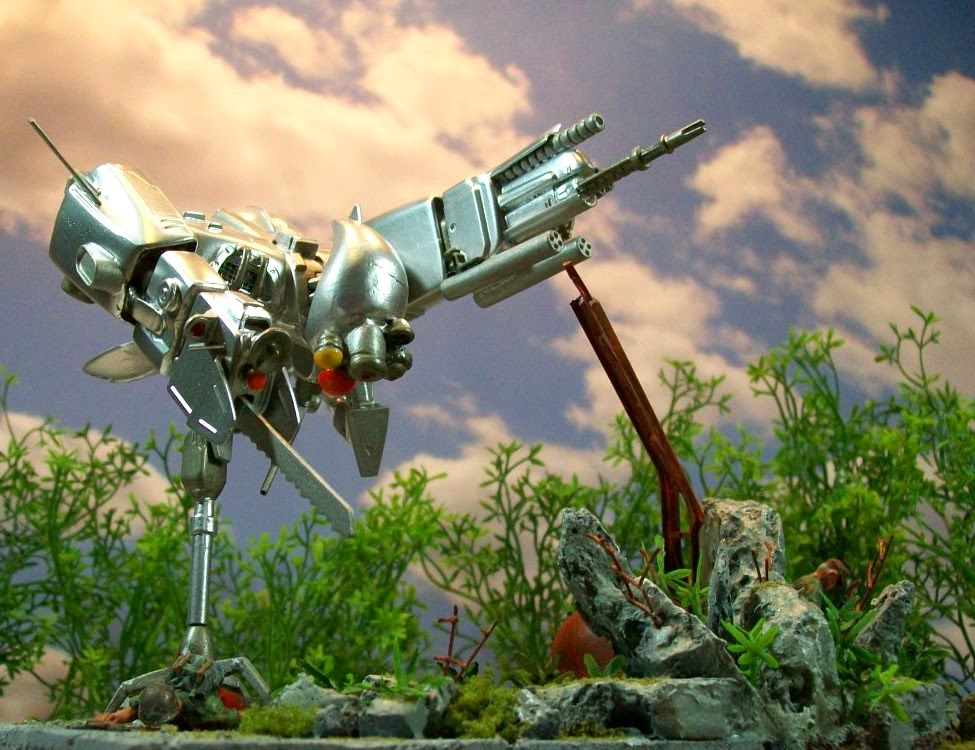 Bonus material available only on this blog.  Special behind-the-scenes photo-shoot of the model with backdrops! 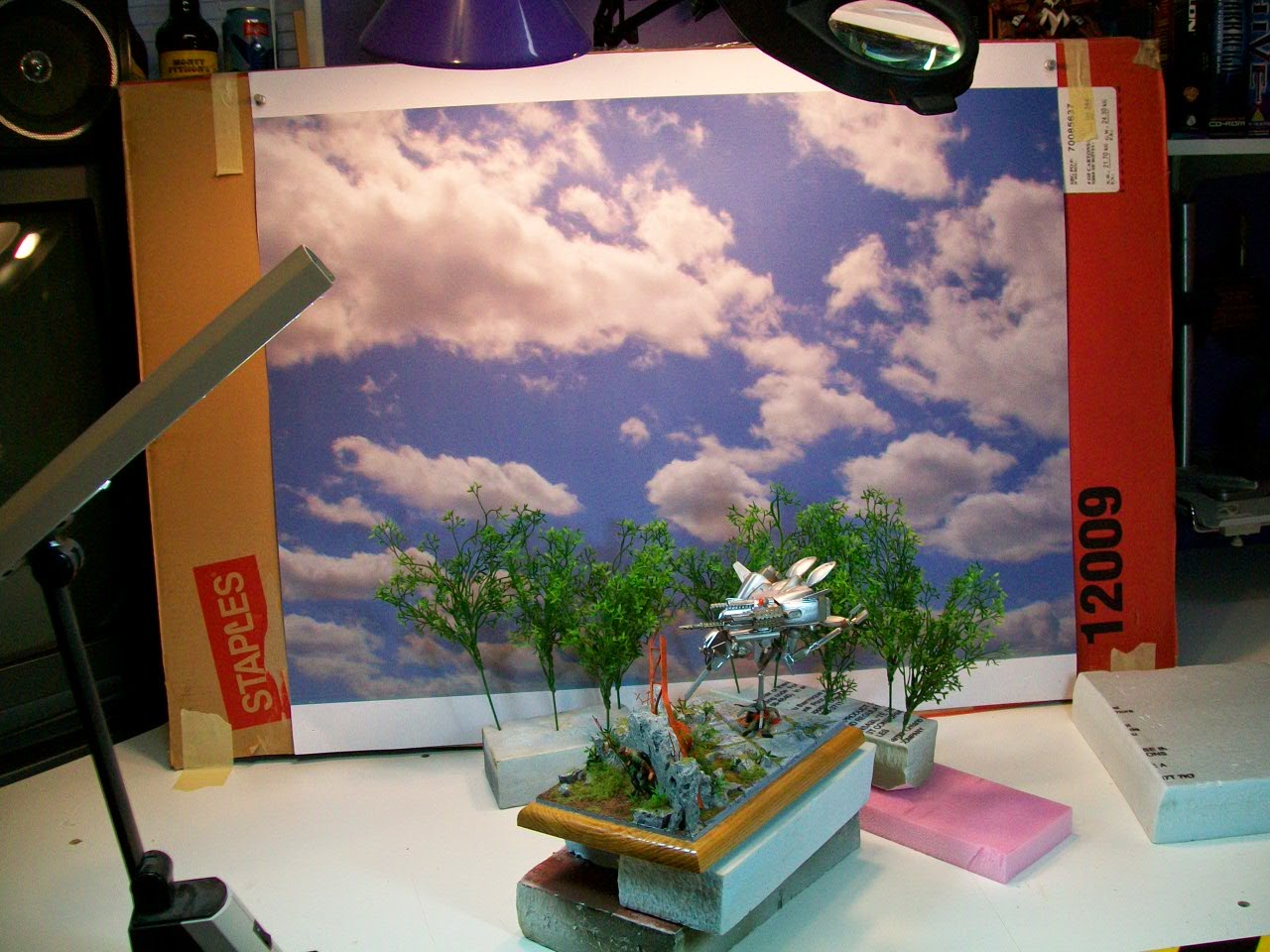