I said I was going to milk this concept for three posts, so here is the final installment!  I was surprised by how this concept just mushroomed into more than just the model.  It is said "A picture is worth a thousand words", but it appears that a model is worth a whole lot more!  I have now created the fictional first season of the show.  24 episodes in all, with basic story outlines.  Some original, and some adapted from the original "Space: 1999" episodes to fit into the new timeline.  (I guess I should put a disclaimer in here, just to be sure I am not stepping on anyones copyrighted toes!  The original images from the series are from "The Catacombs", the best "Space: 1999" site out there!  (http://catacombs.space1999.net/index.html).  It is definitly worth a visit!  And after all these years, I have no idea who has the rights to the show anymore!).

Just a brief set up before we get to binge-watching the series!  Many of the original cast will be present, although the roles will be altered to suit the new timeline.

The rest of the cast stays pretty much the same as the original series.  Some of the above will retire over the twenty year period this series spans.  Music will of course be by Barry Gray with Brian Johnson as effects and Martin Bower on miniatures.  As this is more of an anthology show, there may actually be several months or years between episodes, as well as many guest actors and artists.  So sit back, relax, and grab a cup of tea!  What's this advert in the TV Guide...? 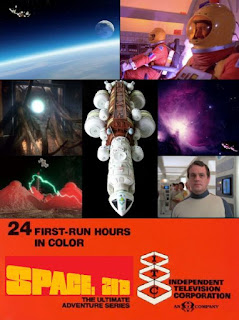 Episode 1 - "Firestorm Part 1"
To cut down on the writing, this is basically "Breakaway", except the explosion at Area 2 is narrowly averted.  Another solution to the nuclear waste problem is required immediately, so Commissioner Simmonds temporarily halts any further deliveries from Earth and appoints Cmdr. Koening in charge of finding a new solution as quickly as possible.  The final shot shows the dark side of the moon strewn with cannisters.

Episode 2 - "Firestorm Part 2"
Anton Gorski is re-appointed as Alpha Commander while Koening, along with Prof. Bergman and a thinktank of assorted engineers try to solve the waste issue.  Unfortunately the waste has to begin shipping up to the moon, but instead of silos the cannisters are piled on the surface in small clusters.  We do a montage of research shots, miniatures, the occasional arguements, and success.  But at the end of it all, two years later in 2001 (no relation...), The first Buzzard is launched.  Or BZ-01, as the designation will be from now on.  The haulers are built in orbit at a new mid way facility (Mr. Bower, build please!), and the waste is transferred at other Lagrange points.

Episode 3 - "Meltdown"
A transfer/loading accident between a transport Eagle and a Buzzard causes a massive spill, several explosions and a radio-active cloud.

Episode 4 - "Mutiny"
(I envision the round trip to solar disposal point from the moon to be about 3 or 4 months.  So crews are expected to be away for extended periods and hopefully screened psycologically?  But we know better...)
Co-pilot Tracy has a personal family crisis and needs to return home ASAP.  As the Captain refuses to comply with the request, Tracy has no choice but to forcibly take control and turn around...

Episode 5 - "Earthbound"
The crew of BZ-09 encounters an alien ship in the inner system.  With some clever maneuvers they manage to board the ship and discover bodies in suspended animation.  Rather than disturb the sleepers, the ship is allowed to continue on its journey (which ends up being the Moon) with an Eagle escort.

Episode 6 - "Short Straw"
A massive solar flare forces the crew to seek refuge in the safe room.  The flare shows no signs of diminishing and the Buzzard is getting too close to the sun.  The only solution is for one man to go to the command module and change course.  But this is a suicide mission, and who will go...? 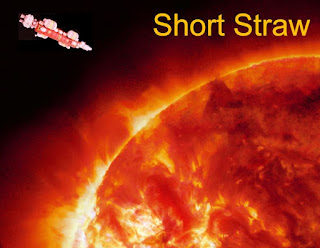 Episode 7 - "Wormhole"
BZ-05 is caught is a spacial anomaly and is catapulted 1500 lights years to Orion.  The crew attempt to locate a habitable planet hoping the supplies and fuel will last...

Episode 9 - "The Derelict"
A rogue comet is in fact an alien spacecraft encasted in ice.  The crew of BZ-02 try to somehow match velocities and hopefully board the vessel.  But what waits beneath the ice...?

Episode 10 - "Slingshot"
A failure of the main drive puts the crew of BZ-06 in mortal danger.  As there is only minimal fuel in the payload boosters, Capt. B. Johnson tries a sling shot maneuver around the sun to hopefully return to Earth.  But will the food and oxygen last at this diminshed speed?

Episode 11 - "Survivors Guilt"
John Koenig decides it was high time to get out from behind his desk and takes command of BZ-10.  His true motives are revealed when he changes course to the alleged abandoned Venus station to find out the true fate of the people he left behind with Venusian Plague...

Episode 12 - "Inquisition"
Part 2 to E11.  Koenig is brought up on several charges for his transgressions and put on trial.  This episode will be full of flashbacks and lots of shouting.  What will the verdict be...?

Episode 13 - "Collision Course"
A large asteriod is going to impact the Earth.  It seems the only way to stop it will be to use a Buzzard as a bomb to hopefully deflect it enough to miss the planet....

Episode 14 - "Death's Other Dominion"
BZ-03 encounters a proton storm en route to the sun and is hurtled far out into the universe to come to rest at a frozen planet.  It seems the planet of Ultima Thule also has survivors of the lost Uranus probe of 1985, so with no hope of return join the community.  The lads then spend most of their time trying to win the affections of Valerie Leon! 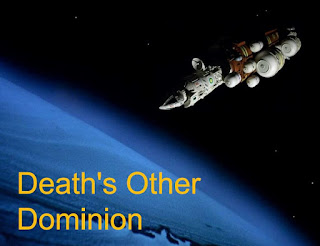 Episode 15 - "File: Deleted"
Capt. E. Bishop discovers his cargo is not radio-active waste but evidence and many bodies from a biological accident which the government wants kept quiet.  Does he risk life and career to expose the truth?

Episode 16 - "Another Time, Another Place"
The obligatory time-travel episode!  BZ-13 gets caught in a time warp and ends up back in September of 1999.  Do they or can they intervene, but it's too late.  Area 2 goes nuclear the Moon is torn out of Earth orbit....

Episode 17 - "Metal Fatigue"
A fatal flaw is discovered in the design of the Buzzards.  BZ-04 explodes soon after loading.  But the other Buzzards are also risk and could also be destroyed.

Episode 18 - "Mary Celeste"
BZ-01 (which went missing after her third flight..) is discovered in the inner void.  There is no damage to the ship (which still has the payload) and no evidence of the crew.  Capt. B. Gray must try to solve the mystery and salvage the ship. 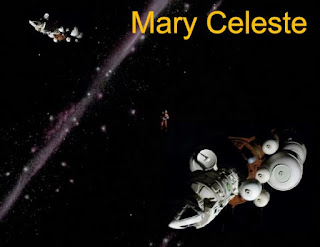 Episode 19 - "Buckshot"
A micro meteor show severly damages BZ-08.  With fuel, waste and oxygen leaking, the crew have to resort to suits and send an SOS.  But will rescue arrive in time...?

Episode 20 - "Served Cold"
Fired from the service for many violations, Pilot Adam Blue hijacks a Hawk and pursues his former ship and captain with vengeance in mind....

Episode 21 - "Locked and Loaded"
As BZ-06 approaches the cargo separation zone, it is unable to disengage the payload and is out of control.  The crew must act quickly to alter course or somehow separate the command module and payload...

Episode 22 - "Apollo 13"
While on a routine run, BZ-02 encounters the command module and three frozen bodies of the ill-fated Apollo mission of 1970.  But didn't the crew return safely?  Evidence supports an obvious government conspiracy, but what should the crew do?

Episode 23 - "Dragon's Domain"
Tony Cellini begins to have nightmares and flashbacks from the Ultra Probe disaster of 1996.  As no one believes his story of a spaceship graveyard and tentacled monster, the crew is startled to find a cluster of alien ships in orbit around Mercury....

Episode 24 - "The Icarus Incident"
BZ-14 is hijacked by an Eco-Terrorist group who want nuclear power plants dismantled and a more green solution found.  Unless their terms are met, they threaten to send the ship back to Earth which would cause widespread radioactive pollution. 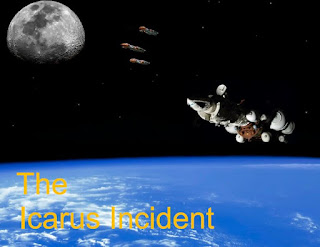 E 24 is a season cliffhanger, to be continued in Season 2.  Will there be a second season?  What are the ratings like, and how is the merchandising going?  So here is my first attempt at fan-fiction.  I hope you enjoyed the stories!  You can show your support by going out and buying the t-shirts, novelizations, Dinky Toys & Airfix kits, and the action figures!  And as promised, this is the end of "Space: 2019".  It's time to move on to something else.  But that will be in a future post!