Just in time to get in one more post before 2016 ends....  Let me introduce the HMCSS Gibraltar: 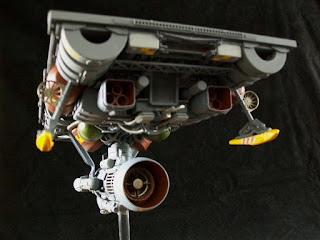 Had to build another spaceship.  This time it was influence from several sources, mostly from the original "Battlestar Galactica".  In the rag tag fleet was a background ship known as the "flattop" used in many group shots and repurposed from time to time.  It was later when I started to read "Heavy Metal" that I noticed the similarity with a ship in the Moebius short "It's a Small Universe", and I knew then I would have to build something like this in the future.  35 years later.... 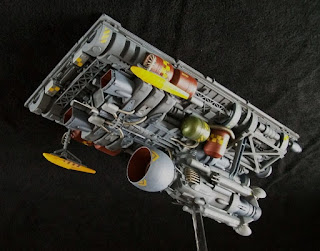 There are some references to the building of the filming miniature out there on the web; I will let you research if you so desire...   This is by far not a replica.  I do not have the time, patience, or funds to build a duplicate.  (Besides I build other people's concepts everyday;  why do that at home...?) 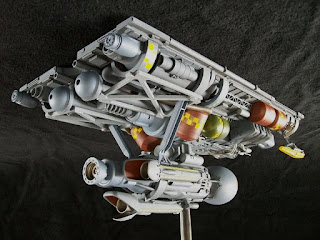 The only "original" part was the upper deck.  To keep some degree of authenticity I traced out the deck and some details from an underlay of the Moebius art in AutoCAD.  Then lazer cut some quarter inch perspex, along with some engraved panel lines.  The deck is now 17" long and 8" wide, with a primary 1/4" plate and a secondary (slightly offset) 1/8" plate. 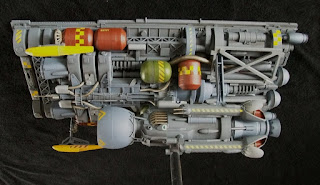 So using the basic concept I started scrounging for all the shapes, greeblies and nurnies I had in stock.  I don't have the luxury like the big shops do with having access to mulitple parts and kits; have to make the best of it with what I have.  I did not want to buy any extra parts or kits for this project, just paint.  Many an evening was spent arranging then deconstructing the underside of the plate.  Lots of leftover lazer cut parts, the omnipresent Kinder Eggs, the new Zaini Eggs (more on those another time...), many dollar store shapes, and parts from assorted armour, aircraft, and other various kits.  The "fuselage" is actually yet another old Dremel housing.  (An interesting fact is the rotary tool case already had a convenient 1/2" hole, perfect for the support rod!). 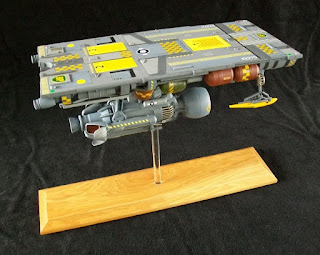 I wanted the upper deck to be almost smooth and opposite from the underside  with only minimal relief.  I went totally "Foss" with graphics!  Along with painting the panels several colours; I used alot of railroad transfers, assorted decals and tapes. 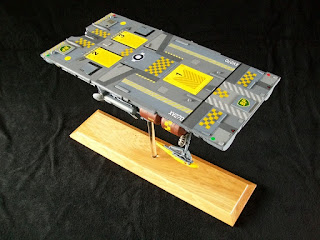 A painting accident set me back several evenings during this phase.  A spray paint I planned to use on the deck actually acted more like a paint remover than paint!  It bubbled and puckered and totally ruined the finish.  I had to scrape all of the paint off (along with smaller panels and other shapes) as well as try to remove the paint which had clogged the panel lines.  Luckily it was salvaged with only minor (repairable) damage.  I will never mix brands again! 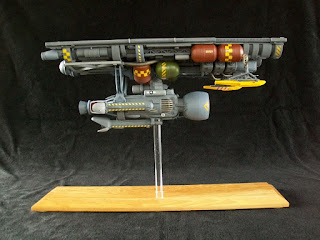 So you have a flat top, now what?  Rather than it just sitting on a stand looking pretty I had to come up with a back story and purpose.  I thought about making it another BG background ship (Leonid of course!), or integrating it into the Alien universe with Weyland-Yutani logos on it.  I decided to make it part of my fake sci-fi "Space: 2019" series, and make it the guest model in one of the "episodes". 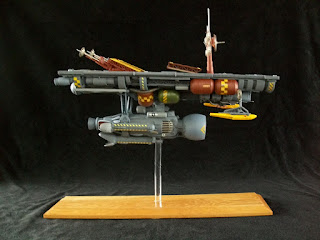 HMCSS Gibraltar (Her Majesty's Commercial Space Ship) is a Foss Class Survey Ship, the only one of it's kind.  425' long (130m), this vessel cruises around the solar system cataloguing asteroids and other potential resources for mining.  (I based the dimensions on a scale of 1/300).  The ship has pop-up sensor arrays (located from the original drawing) which are only deployed when needed, otherwise they are kept safely under the deck. 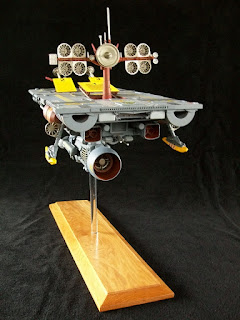 I had been hoarding old contact lens cases for years; now it was time to use them!  The lens holders work nicely with already hinged connections and make convincing arrays, and the plastic cases were also used on the underside and fuselage.  Other bits and pieces were then used to finalize the sensor clusters.  (Normally I would have a photo or two of the unpainted model; I will do a separate posting on further construction another time...) 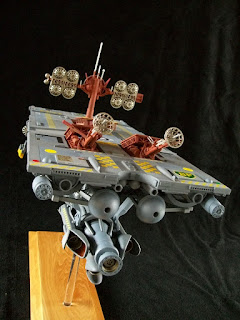 So back to the fake series.  Season One, Episode 13, "Collision Course".  The Gibraltar is out surveying; pet rock hunting as it where.  It stumbles upon a rogue asteroid heading for Earth.  The rest of the story is of course how to stop it.  I chose to use BP as the company who owned the vessel.  I figured they would venture out at some point looking for more resources, and growing up I had many Matchbox vehicles all nicely painted green and yellow!  (I realize the logo has changed; I like this one better!).  One more fake reference to the episode: 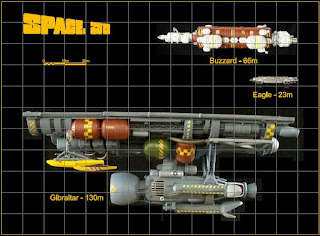 The last model of 2016.  Check back soon for further details about construction in a segment I call "Shape-Spotting".  All the best for 2017!
Posted by The Breaker's Yard at 1:52 PM