Shape-Spotting: "I am the Egg Man"

This first post of 2017 is also the first in a series where I show some of the unique non-model kit related shapes I collect and hoard.  The first is the most used item which has become a sort of tradition over the years.  At least one example of this shape is in every model I have made in the past several years.  They are, of course, the Kinder Surprise eggs. 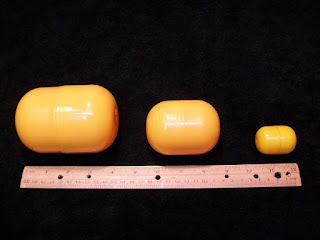 I first became aware of these eggs/plastic capsules when I began dating my wife.  The family tradition was to have an egg at Christmas Eve (usually in the stockings), and then another one at Easter.  I saw many possibilities with these eggs and also with the toy surprise inside.  So it was at this point the collecting began.  Made of soft plastic (not an acrylic or styrene), they can be glued with epoxies or similar glues, and take paint after mild sanding.  At the beginning, it was primarily the small (4.4cm x 3cm D) eggs, but later on, the larger (10.8cm x 7.5 D) eggs were available.  It wasn't until recently I discovered a third medium size capsule (7.6cm x 5.7 D) when I was given a donation of eggs from a co-worker (thnx Erika!) to help replenish my exhausted supply from a recent project (see previous posts).  The eggs can represent anything from fuel or other chemical tanks, gas or liquid, flotation devices and other similar containers.  I have used them as "ammo boxes" on a early (unpublished) Gunpla work here: 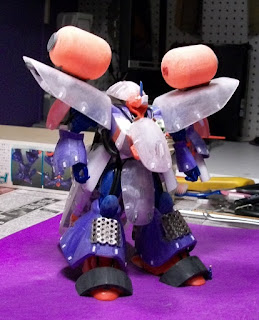 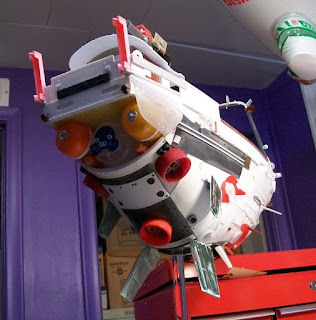 And the epic amount of 24 assorted sizes on the Buzzard: 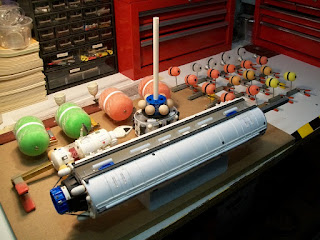 The one little annoyance with the capsules is the seam.  You can glue them and if you so want, spend time sanding and filling the gap with putty.  I like to use a band of very thin styrene or 1/4" border tape to hide the seam.  Unfortunately, several years ago the capsule design changed from the separate halves to a single hinged egg with a dimple for opening the egg.  I am not a fan of this configuration, preferring the "classic" look.  At least the medium and large sizes are still of the same construction.

But then, about a year ago, I noticed another eggy chocolate/toy in a clearance bin at a local grocery store.  I purchased one, and to my surprise, this egg was better!  I went back to that store the next day and bought a dozen more.  I had found the Zaini Egg: 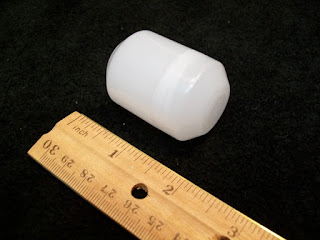 Still made of a soft plastic, these little gems are 4.4cm long with a diameter of 3cm.  The ends are chamfered with a blunt end, and there is actually a base (1.2cm wide) where the hinge for the capsule is.  The same glues can be used as on the Kinders and again the seam can be puttied or covered by a thin strip.  My most recent project, the "Gibraltar" is the first time I have incorporated them into a model (the "fuselage" has been omitted for clarity): 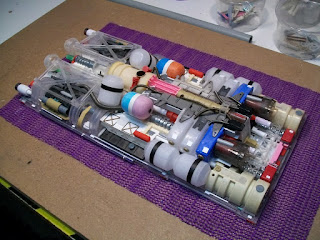 Six Zaini's and only two Kinder Eggs this time...  The Zaini's are clear plastic, while Kinders are mostly coloured and opaque.  The Zaini's mount easier, because of the flat base, but the Kinders have to be secured some way with a bracket or brace.  Then its a good coat of paint, maybe some decals and then a bit of shading.  Both capsules have their merrits and work well!  Now if Zaini only had a jumbo version....
Posted by The Breaker's Yard at 5:01 PM