New look; new format!  I had originally intended this blog to be a platform to showcase the models and miniatures I construct.  But there are many other things to say and/or contribute, so today I am starting with a new ongoing feature.  Over the years I have collected many articles from magazines and other print sources which deal with miniature and model work, as well as practical in camera effects and props.  (I apologize in advance for the quality of some of the images.  That paste I used so many years ago was not "time friendly"!)  My first post was taken from TV Guide magazine way back in 1975.  (Is this still copyrighted by TV Guide; I have no idea,  but I shall acknowledge the source just to be sure...). 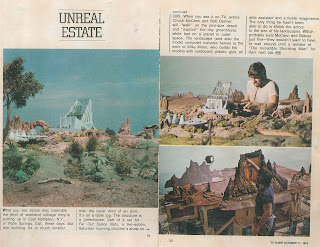 The October 11, 1975 issue featured an article on some model work for the Sid and Marty Krofft series, "Far Out Space Nuts".  Lasting only 15 episodes, this Saturday morning live action series starred Bob Denver and Chuck McCann.  (I will let you research the series further if you so wish; the episodes are available on YouTube...).   The amazing fact of this clipping is the model builder is non other than Mike Minor!  If you follow Star Trek, you should be very familiar with this man.  (Again I invite you to look further into Mr. Minor's history....).  Nice to see good old simple effects, as well as the use of dried teazel flowers for use as alien vegetation!   Until next time: "Think big, but build small!"
Posted by The Breaker's Yard at 6:32 PM