For tonights post I would like to revisit a small project I did a few years ago.  Rather than the "traditional" modelling with kitbashing and assorted shapes, I decided to first, build the model on a computer, and then have it created in a Stereo Lithography machine (resin not 3D printing).  As another of my hobbies are RTS computer games (which back then took up way too much time...), I selected a vehicle from the game "Tiberian Sun".

Released in 1999 by Westwood Studios (closed in 2003 by EA), it was the sequel to the original "Command and Conquer".  Other popular titles were the "Red Alert" series and they also took the format to Arrakis in "Dune 2000".  The storyline was basically fighting the baddies with various machinery, base building, micro-management and assorted missions.  Another distinct feature of the Westwood games was the use of FMV cutscenes before and after the missions, which included well known genre actors like James Earl Jones and Michael Beihn.  (Sometimes I just liked to watch the "movies"!).  It is still played today, and you can research it yourself if you so choose.

The vehicle I chose to model was the Hover MRLS (Multiple Rocket Launcher System) from the good guys, the Global Defence Initiative (GDI).  It had clean lines so was fairly easy to model.  I started by first drawing up some basic plans in AutoCAD, using images and references I gleaned from the good old internet.  I then exported the drawings into a 3D program called "Solidworks" and modelled it from there. 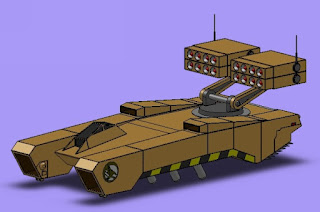 From the "model" it was then off to the resin goo where the replica is created by a lazer which cooks the polymer a few fractional millimeters at a time.  Even a small model like this may take several hours to create.  Once completed, the model is removed from a steel tray, and goes through a cleaning process involving several chemicals and a final curing in a UV oven.  Unfortunately I did not take any photographs of the "birthing" when it emerged from the soup.  One drawback with this process is the support material necessary during the build process.  This fine web has to be removed carefully and then there are usually minor repairs, especially around delicate areas.  The end result: The MRLS is 4.5" in reality; I calculated the scale to be approximately 1/72, based on the images I used).  (I also made an 1/87 model in Solidworks for use in a model railroad at some future date; still waiting....).  No real special modelling techniques this time, just the basics. 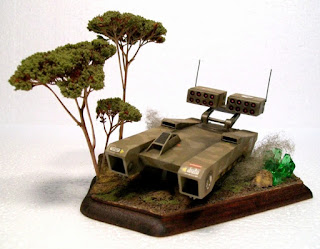 Enamel military colours with pastels for weathering, and the GDI logos are custom decals. 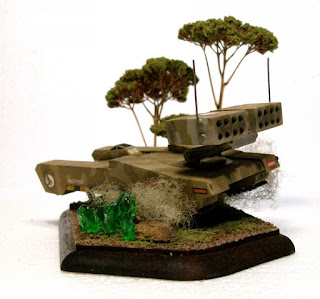 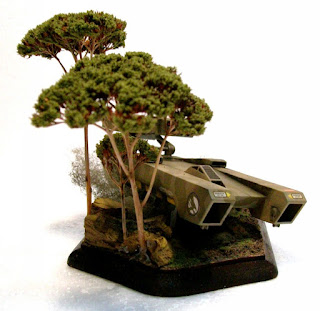 The scenery was made using dried Sedum flower heads.  They grow like weeds in our garden, so I get alot of free trees!  I just leave them over winter and let nature freeze-dry the plants.  I then harvest what I need in spring.  You can cut and combine to make whatever shape you want.  I then use acyrilic paint on the seed head and dip them in scenery flocking.  Various shades of green bring them out nicely, even at this scale.  The rocks are just carved foam, and the "Tiberium" crystals are made from broken glass beads. 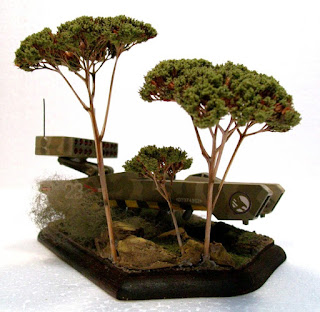 One thing evident is the complete lack of the Kinder Egg, but it won't happen again!  I couldn't figure it into the scenario, and besides, this was not my usual way of modelling.  Now I feel it may be time to dust off that CD-ROM case and go save the war-torn world of 2030 yet again!
Posted by The Breaker's Yard at 5:25 PM