Well, not exactly...  But "back in the day", before the internet, before this instantaneous exchange of information, we had to wait patiently for tidbits and bread crumbs concerning any new films or TV shows.  Besides  Famous Monsters and The Monster Times, there were very few sources in the early and mid seventies.  So when other magazines would feature an article, especially about a new Gerry Anderson production called "Space: 1999", these little gems would be readily purchased without a second thought.  Such was way back in February of 1976 (41 years ago?!), I spotted an issue of a Man's magazine called Saga which had a photo of an Eagle on the front cover.  ($0.75 suddenly gone; there went my allowance!).

Saga was an offshoot of a popular UFO magazine from the same publishers I believe.  Mostly newsprint pages with a few glossy pages inserted for the "special" features.  (I have no idea how long the magazine was in print, but I don't think it was printed past the 1980's.... )  Also lots of adverts on new careers like radio repairmen, draughtsmen, locksmiths, & automotive customization, as well as ways to increase your muscles and attract lots of women!  (I'll put a disclaimer in here for Gambi Publications, the publisher of this American magazine, if anyone is still out there..?).  But I was more interested in this centerfold: 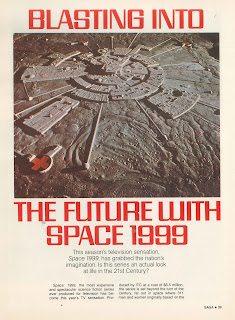 The show had been on the air for five months now, but (the horror of it all...), we only had a B & W television!  So full colour photos are like gold!  Never was Moonbase Alpha so clear, and the landing pads are red!!!  But turn the page... 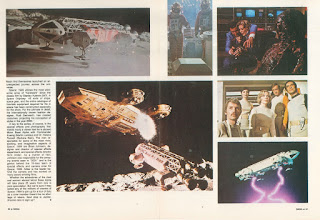 So much colour!  I can't remember if "The Last Enemy" had even aired yet!  But the series went on; many reruns and eventually, before the first season ended, I managed to purchase a colour television.  (You want something you go out and get a job!).  So it was back to FM and TMT for news; there were rumours of a second season, but it was not confirmed until I found the October 1976 issue of Saga with yet another colour centerfold (now remember most magazines are released a few weeks ahead of the published date, so the new season was yet to air...).  The cover price was raised to $1.00, but now I had a job! 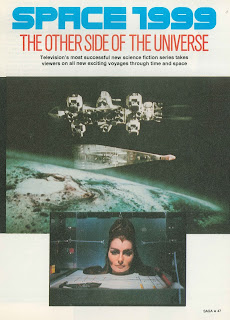 New ships; new characters...  What's going on?  Guess I will have to turn the page... 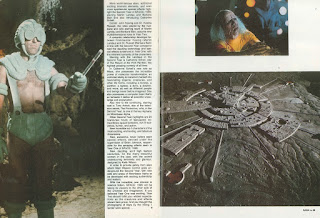 Wait...  What...?  Only three pictures this time, and one is the same shot of Alpha just slightly cropped.  Guess this was a portent of things to come.  Unfortunately I never saw much of the second season of "Space: 1999" in its first run on television.  The time slot was such that I was at work (it was aired on Saturday afternoon) so by the time I was home it was over.  I did manage to see some other episodes on the French channel, but that was about it.  Thank the Maker for DVD box sets!  As for other information sources, I acquired my first issue of a new sci-fi magazine called Starlog a few weeks later (it was already the second issue).  I was content!