Tonights post is hardly a miniature, but it does fall into the catagory of in-camera effects and props.  After the fall of "Star Trek", Gene Roddenberry tried several times to create new series in the sci-fi vein.  One of these was called "Genesis II", and aired way back in 1973 as a 90 minute TV movie on CBS.  (My first viewing of this film was on a BxW television trying to get a decent signal by antennae from Buffalo, NY!).  I won't go into too much detail here; there is enough out there on the internet if you want to pursue it further... ( It is probably availabe to watch on YouTube).   Basically a scientist named Dylan Hunt (played by Alex Cord) gets trapped in suspended animation after an earthquake seals off his chamber in a scientific research facility in the Carlsbad Caverns.  Fast forward to the year 2133, the now inhabitants of this complex find the chamber and revive him.  What follows is his many adventures in the new world, after the "Great Conflict" along with several "Star Trek" alumni.  The travel gimmick in this film is not a starship, but an underground, nuclear-powered "sub-shuttle", a combination of miniature effects and the full-size prop.  Here is a little feature that appeared in the March 1973 issue of TV Guide: 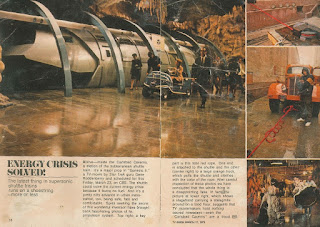 Our protaganists would use this device to travel all over the world to bring peace and friendship to other post-apocolyptic societies.  As with "Star Trek", a second pilot film was made called "Planet Earth",  but this 1974 offering has John Saxon replacing Alex Cord and again more Trek actors.  Apparently I have found evidence that CBS had optioned six episodes as a mid season limited series; Roddenberry had 20 intitial story outlines.  But as more often than not, the show never made it past the two pilot films.   But a few decades later, many of the plot elements got reused for the Kevin Sorbo series "Andromeda", about a starship's captain called Dylan Hunt (?), who after being trapped on the event horizon of a black hole for 300 years awakens to find his society gone and begins a quest to restore peace to the galaxy....  Oh do I miss the '70's.....
Posted by The Breaker's Yard at 5:48 PM