How many times have you been watching a SF film or television series, and suddenly realized, "Hey, they ripped that (ship, vehicle, alien, structure, etc) from that other (SF film-TV show)!"  And so begins another little feature I have had in the back of mind for some time now.  I realize in this day and age, where so much has been written, drawn, or filmed, there is bound to be conscious or unconscious influences when it comes to production design.  Now to be fair, SF films have been around for over 100 years, so there is alot of material out there!  In some cases, the "doppelgangers" may be intentional, as a hommage or Easter egg.   Perhaps the director has specifically asked for "something which looks like that other thing..."   Either way, there are many examples available.  For the premiere post, I have a flying machine which falls into the category I like to call, "Cosmic Combinations". 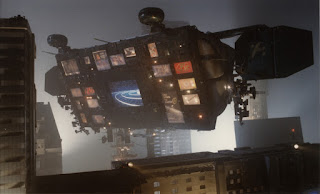 Back in 1994, there was a Gerry Anderson live-action series called "Space Precinct".  Basically an SF cop show set on the planet Altor in the year 2040.  Familiar storylines but, the thin blue line has to deal with all sorts of bizarre crimes as well as many alien species.  There was no shortage of miniature effects either.  In the episode "Deadline", the baddies are illegally harvesting organs (both human and alien) for high paying clients.  Their base is this giant floating billboard which cruises over the city with bright lights advertising and noise.  Sound or look familiar...? 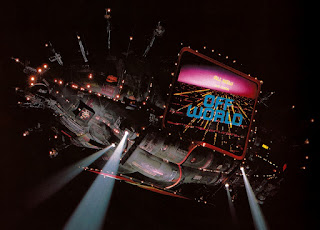 Who else could the father be but the advertising blimp from 1982's "Blade Runner"!  I could go on for hours about this film!  I've been freaked out since I saw this film on opening night!  The influences and inspirations are still strong today, (but don't get me started about this sequel!).  But the blimp is a thing of beauty.  Check out the web for many images of the blimp studio model and it's construction.  But the shape is still wrong.  I think the mother could be: 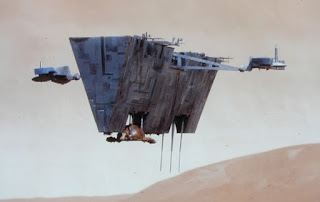 From the 1984 film "Dune".  Alot has been said about Lynch's adaption, but not today.  I am more interested in the miniature effects for the film, and this wedgie is a Carry-All, a huge flying brick which transports spice harvesters on the planet Arrakis.  So there you have it; the "Space Precinct" blimp even has the outriggers on it!  I like to think of this little "love child" as a hommage.  But as in all Anderson productions, most models do not have a happy ending...

To bad for anyone with a penthouse suite in this town!
Posted by The Breaker's Yard at 12:15 PM